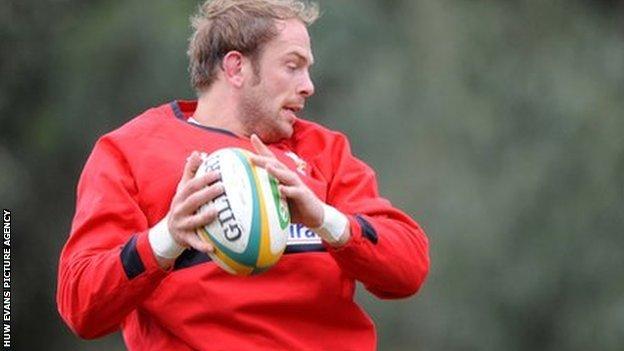 Wales have made three changes for their Six Nations trip to Scotland including the return of Sam Warburton and Alun Wyn Jones.

Warburton and Jones take over from Justin Tipuric and Andrew Coombs respectively.

Paul James is named at loose-head prop for the injured Gethin Jenkins, who has not recovered from a calf problem.

Ryan Jones retains the captaincy despite Warburton's return to the starting line-up.

"It's disappointing for Gethin to miss out but Paul has impressed and made an impact in each game he has played," said Wales interim head coach Rob Howley.

"We are bringing in a wealth of experience with Alun Wyn and Sam and they both performed well off the bench in Rome.

"Ryan has led the team to two wins and deserves to captain the side against Scotland.

"We have spoken a lot about momentum in this tournament and we go into the game with two wins under our belt but Scotland are in the same position and it's going to be a good challenge.

"We have had two good, hard fought away victories but we know will have to be at our best again to come away from Murrayfield with the result."

Wales and Scotland go into Saturday's match level on points in the Six Nations table with two victories apiece.

And Howley's team will be looking for their fifth successive away victory in the tournament, a feat they have never achieved before.

For the fourth match running Howley has named an unchanged back line to the side that beat Italy 26-9.

Mike Phillips will continue his partnership at half-back with Dan Biggar with Jamie Roberts and Jonathan Davies named in the centre.

Leigh Halfpenny, Alex Cuthbert and George North again make up the back three.

Four changes on the bench from Rome see Ospreys prop Ryan Bevington come in for James and Scott Andrews replacing Craig Mitchell, with Coombs and Tipuric swapping places with Jones and Warburton respectively.