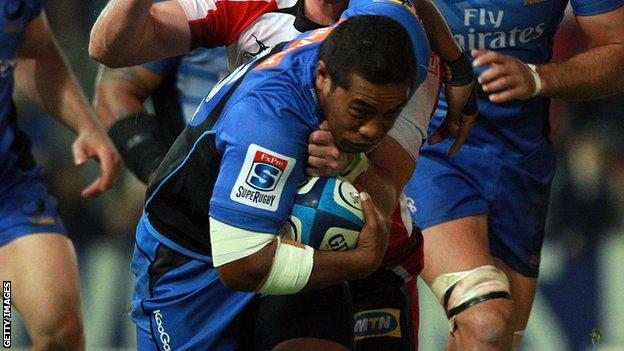 The 29-year-old hooker played three times for his homeland in autumn internationals against Italy and the USA last year.

He completed visa and registration arrangements before the RFU Championship's 1 March deadline.

He is expected to be in Jersey's squad for their trip to Plymouth Albion this weekend and challenge Steve Boden and Dave Felton for the number two shirt.

"We have been looking to add another front-row specialist to our squad and have been working to secure a deal for Elvis for some time," said Jersey director of rugby Ben Harvey.

"Unfortunately, it took a while to secure the necessary clearance but I'm delighted this was obtained in time.

"Elvis is an experienced operator who has played with and against some of the world's leading players in Super Rugby, and we are confident he will bring an additional edge to our forward play as the Jersey squad continues to evolve."

Taione is the the second Tongan international at St Peter, joining former Jersey captain Talite Vaioleti, who won two caps for his country.