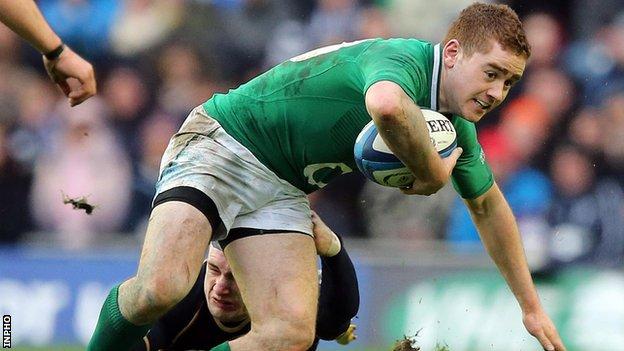 Paddy Jackson has retained his place at fly-half for Ireland's Six Nations clash against France in Dublin.

Ian Madigan of Leinster earns his first call-up to a match-day squad as he is named as a replacement.

Coach Declan Kidney had left the number 10 place vacant as there had been a slight doubt over Jackson's fitness.

First choice fly-half Jonathan Sexton is out with a hamstring injury while record point scorer Ronan O'Gara was dropped from the Irish squad.

Sexton missed the Murrayfield game after being injured in Ireland's home defeat by England.

Jackson's team-mate, winger Craig Gilroy misses the France game because of a groin injury, so Leinster utility back Fergus McFadden is named at wing.

McFadden will offer a further kicking option for the Irish after Jackson's struggles at Murrayfield.

As expected, Cian Healy and Mike McCarthy replace Tom Court and Donncha O'Callaghan in the pack after missing the Scotland defeat in a side that shows three changes from the last outing.

The replacement tight head slot, which had been left vacant, has been given to the uncapped Munster prop Stephen Archer.

Jackson, 21, will be winning his second cap in Saturday's must-win showdown between the two biggest flops of this year's Six Nations.

"Paddy's hamstring first tightened up after Monday's session so there was a bit of concern about him," said Ireland team manager Mick Kearney on Thursday.

"He sat out the session on Tuesday, received treatment and did some light running in the afternoon.

"He then came through kicking at the Aviva Stadium yesterday afternoon very well, so that clarified things for us, but up until then there was some small doubt.

"There was no discomfort this morning so he will be fine."

Andrew Trimble's hopes of having his first involvement in this season's Six Nations have been dashed after Luke Fitzgerald was retained in the replacements.

Both Sexton and Gilroy are expected to be in contention for Ireland's final Six Nations game against Italy on 16 March.