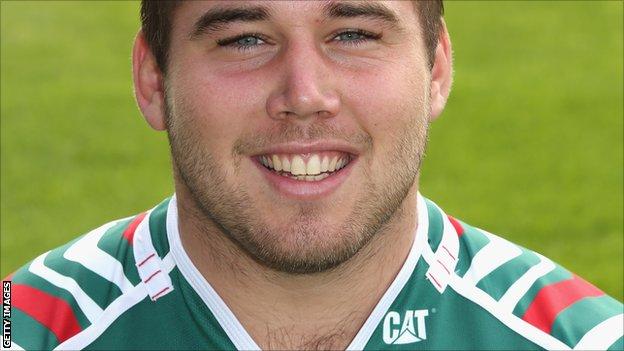 Newcastle Falcons have re-signed Leicester Tigers prop Kieran Brookes on dual-registration terms until the end of the season.

The 22-year-old has struggled with injury at Welford Road, and returns to the club where he started his professional career.

"I'm really pleased to be back in Newcastle," the England Saxons international said.

Brookes left Falcons in 2011 with a growing reputation as an aggressive tight-head, but injury early on ended his first season prematurely.

Since then the quality of fellow tight-heads Martin Castrogiovanni and Dan Cole, as well as utility front-rower Logovi'i Mulipola have limited Brookes' opportunities to just three Premiership appearances.

Meanwhile Kingston Park has been the scene of much change since Brookes' departure.

Dean Richards arrived as director of rugby in the summer following relegation from the Premiership, and has guided the club to the top of the Championship in their bid for an instant return to the top flight.

"From first impressions I can see that there has been a lot of positive change taking place at the club since I was last here," he said.

"There is a new coaching set-up, new medical suite and new personnel at the top which really bodes well for the future of the club."

Richards added: "Kieran is a good acquisition for the club, and he brings strong go-forward to the pack as we prepare for the end of season play-offs."