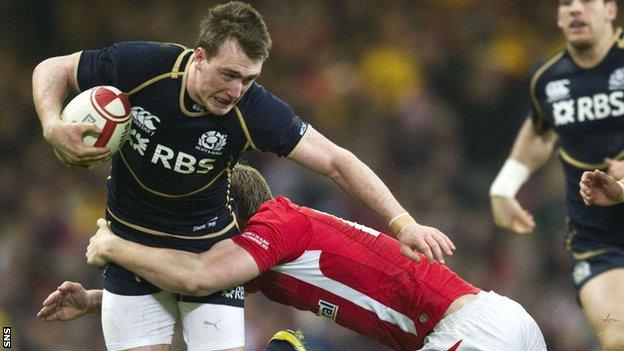 It's been a fairly bizarre Six Nations for Wales and Scotland.

Scotland have been sorely lacking in possession in their three games to date but have come out with two wins.

This has been mainly down to taking try-scoring opportunities, good scramble defence and having the most prolific goal-kicker in the championship.

There should be some concern over the trend in match statistics and greater possession will certainly give greater opportunities to win Test matches.

Statistics make more sense when you try and look for explanations for them. Their low territory has massively affected the possession statistics as Scotland have so far refused to mess around in their own half of the pitch and have chosen to play for position with competitive kicks generally from the base of the ruck with Greig Laidlaw, or straight from the set-piece.

Against Wales, I believe they will maintain their tactics of not playing in their own half but will look to improve on their kick chase, making it a real 50/50 contest in the air

Scotland's opposition, in contrast, have looked to keep the ball in hand, Italy especially playing from deep with England and Ireland playing multi-phase rugby, confident in their ability to recycle possession and attempt to wear down the Scottish defence. This goes a small way into explaining how these statistics arise.

Against Wales, I believe they will maintain their tactics of not playing in their own half but will look to improve on their kick chase, making it a real 50/50 contest in the air. Alex Cuthbert will be the aerial target.

As expected, there aren't many changes with the notable exception of Duncan Weir who made a positive impact versus Ireland. His big boot will take the focus off Laidlaw a touch and perhaps points slightly more towards the kick pressure game.

Once Scotland hit the 50m line, Dan Biggar has to be tested out. He can tackle but there are yards to be made and I'd like to see Tim Visser and Johnnie Beattie searching him out. Don't be surprised to see a few different attacking kicks too, a good tactic against a rushing Welsh defence.

There also needs to be some improvements in front line defence. The two or three errors against Ireland will be punished by the Welsh.

The ease with which debutant centre Luke Marshall broke through a couple of times two weeks ago means Wales too will be looking at the tight two-pass plays with late movement and deception. Winger Alex Cuthbert has already scored two tries in the Championship in similar fashion.

Wales come into the game with two victories to their name as well and have produced a real mixed bag of performances.

Having been 30-3 down at the Millennium Stadium, to a Brian O'Driscoll-inspired Ireland, after seven consecutive defeats, they will have been pulling their hair out. A better second- half display, followed by a ground-out win in Paris - not to be underestimated - and a composed, organised performance against Italy, shows a side that is building in confidence.

The Welsh side of the past three to four years have prided themselves on their conditioning work, and, in 2009, 2011 and 2012 this has played a major part in their winning tactics against Scotland.

Not kicking the ball to touch, therefore keeping the ball in play for as long as possible, targeting the breakdown, direct ball carrying and power at the scrummage, have been key in those victories. Expect to see the same again and watch in particular for both wingers, Cuthbert and George North, popping up all over the pitch for a ball carry.

With Biggar at 10 there is certainly not the flair of James Hook or the ability to attack the line like Rhys Priestland, but he is quietly coming onto a game and bosses the people around him with the confidence of a man playing his 50th international.

He has the quality of kicking game to play the corners and with Scotland's increasingly dangerous back three, they may prefer the line-out option as opposed to handing over a counter-attacking opportunity to the Scots.

So, there we have it. That's what I expect to see but this championship has been so up and down that nothing would surprise me.

Anyone for the draw?