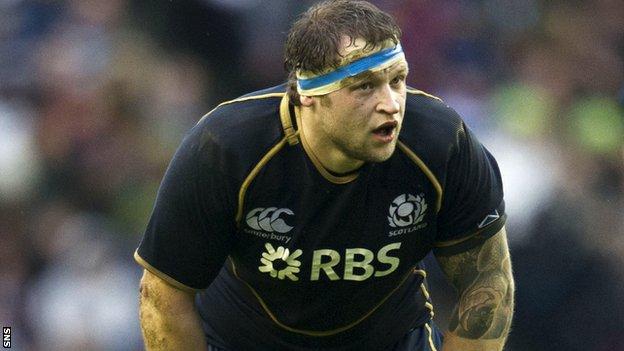 The two sides meet at Murrayfield.

"We got a good attacking performance in against Italy and we had a great defensive performance against Ireland," Grant told BBC Scotland.

Wales are a different animal altogether

"Now the job is to marry those two together and play with attacking intensity, but at the same time defend like we did at the weekend."

Scotland and Wales are currently level on four points, having both won twice and lost once.

And Grant thinks the tackle contest is a huge area for Scott Johnson's men.

"That's detrimental when you're trying to get someone like Johnnie Beattie or Sean Maitland on the front foot. They need quick ball because they're quick guys and good players.

"When the game gets stunted like that or when we get knocked backwards it takes the momentum away from those boys and they can't play the way they want to play.

"We've put a lot of work into that this week so hopefully we'll have that sorted."

Scotland are chasing three wins in a row after comfortably seeing off Italy and then emerging as narrow victors against Ireland.

But 28-year-old Grant is not underestimating the challenge they will face this weekend.

"Wales are a different animal altogether," he began.

"We watched their game in depth and they've got a very good scrum. Adam Jones has been around for a lot of years as well as Paul James.

"With scrumming you can never be over confident, it all depends on the day and we'll know a lot more after the first scrum."

Duncan Weir will make his first start for Scotland, while Euan Murray returns to the team after missing the Ireland match.

Murray echoed Grant's views about the Welsh being formidable opponents.

"There's a few British Lions throughout their team," he said.

"They'll be running very hard and be very aggressive and we've just got to match that.

"We're confident going into every game, and we've done well, but we have to keep our feet on the ground.

"It's been a long time since we've won three games in a row in a Six Nations. We're going to take confidence from the past games but be determined to work harder."