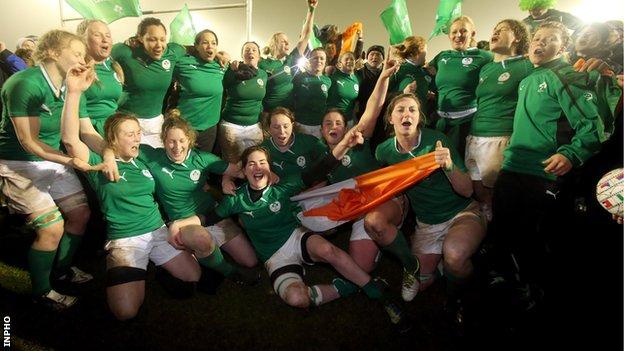 Ireland have been crowned women's Six Nations champions after title rivals Italy were beaten 34-0 by England on Saturday.

The previous night the Irish had made it four wins from four with a 15-10 victory over France at Ashbourne.

That put Philip Doyle's team four clear at the top of the championship table with the Italians the only country capable of matching their eight points.

Ireland will complete the Grand Slam if they beat Italy on St Patrick's Day.

"We were keeping an eye on the England game via a video stream," said Ireland captain Fiona Coghlan.

"England seemed to have it sewn up by half-time and it was just a matter of waiting for the final whistle.

"This success has been a good few years in coming but we have been improving each year.

"We have youth and experience in our team and the blend has clicked this year."

In Friday night's game, Niamh Briggs notched a first-half try for Ireland but France fought back to lead 10-5 by the interval at Ashbourne.

However, Ailis Egan's try levelled the contest before Briggs converted and another Briggs penalty sealed the win.

Ireland's performances this season had already guaranteed them a place at the 2014 World Cup.

They started their campaign by beating Wales 12-10 in Port Talbot and then enjoyed a superb 25-0 victory over England in Dublin.

The Triple Crown was clinched with a 30-3 success in Scotland before the 100% record was maintained with Friday's win over France.