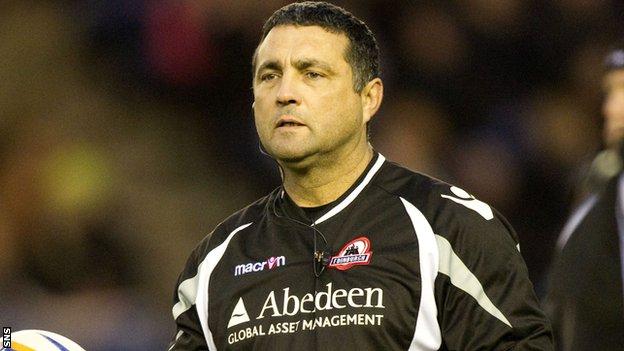 Michael Bradley has left his role as head coach of Edinburgh Rugby with immediate effect.

It had previously been announced that Bradley, whose assistant Neil Back has also departed, would leave Edinburgh at the end of the season.

Scott is currently Scotland's skills coach and Hodge is their kicking coach, as the national side seek to get their third Six Nations win in a row against Wales on Saturday.

And the duo will remain committed to the Six Nations campaign before taking the reins at Edinburgh on 18 March, following the competition's conclusion.

Scottish Rugby chief executive Mark Dodson said: "We feel this move is necessary to give a fresh impetus to the squad going into the remainder of the season.

"Our search for a new coaching team for Edinburgh Rugby continues, with a view to getting the club back on a winning track."

Edinburgh's next game in the Pro12 is against Ulster on 22 March.

"I'm delighted to be given this opportunity for the rest of the season," said Scott.

"Naturally the big thing for me at the moment is my commitment to the national team.

"But, come a week on Saturday night in Paris, I'll be straight into Edinburgh Rugby mode and will be working with Duncan to get the players ready for the home match against Ulster and the rest of the season."

Both Scott and Hodge are former Edinburgh players and Scotland internationalists.

"As someone who played over 150 games for the club, I'm delighted to be given this opportunity to assist Edinburgh Rugby and have an influence on the last five games of the season," said Hodge.

Bradley's contract was due to expire in May, and Back's the following season, but they agreed terms to bring them to an early end.

"I'd like to thank Michael and Neil for all of their input and wish them the very best in the future," said Edinburgh Rugby's managing director Craig Docherty.