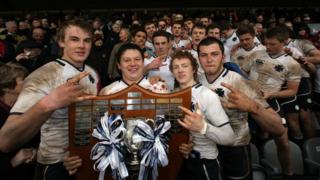 Methodist College win the Schools' Cup for a record 34th time by beating Belfast rivals RBAI 20-5 in the final.

Inst took the lead through skipper Josh Atkinson - but that was to be their only score of the Ravenhill showpiece.

Fly-half Josh Bingham scored two tries and winger Conor Kelly got the other as Methody's superiority told in the end.