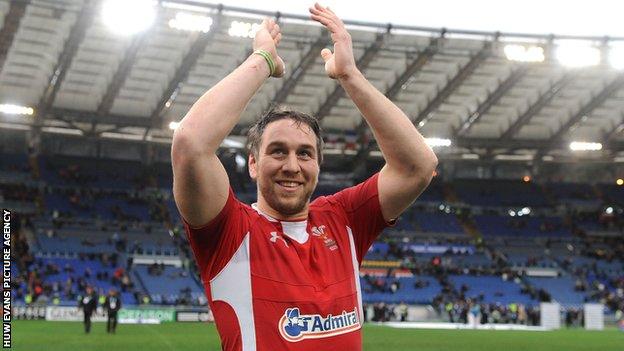 Wales forwards coach Robin McBryde has extolled the qualities of captain Ryan Jones ahead of the Six Nations clash in Scotland.

Jones took over the captaincy when Sam Warburton missed the win over France in Paris because of a shoulder injury.

Warburton will start in Murrayfield, but Jones, 31, retains the captaincy.

"The way Ryan's playing at the moment and the way he's leading the team, it really has been a huge boost for us as a coaching team," McBryde said.

"It makes your job so much easier as coaches when you've got somebody as able as Ryan to say the right things at the right time and not overplay the role.

"I think he's learnt from past experiences and he's putting them to good use."

Ospreys forward Jones, who will extend his record to 32 games as captain, will skipper a side showing three changes to the one which won in Italy.

But despite Warburton's return to the starting line-up, coach McBryde says retaining Jones as skipper was crucial for continuity.

After losing to Ireland in their opening game, Wales won away in France and Italy with Jones as captain.

"We felt we needed that consistency and Ryan in fairness has taken the reins," McBryde added.

"I think he's benefited from not having the greatest of autumns with us as a national team.

"He really has put that to good use and as a captain he's been able to shine and not let that added responsibility affect his performances.

"I'm sure it will benefit Sam not having that responsibility on his shoulders [and] go out there and play to the best of his abilities.

"It allows Sam to concentrate a little bit more on his own game and set his marker down. The week after we'll measure and talk about things then."