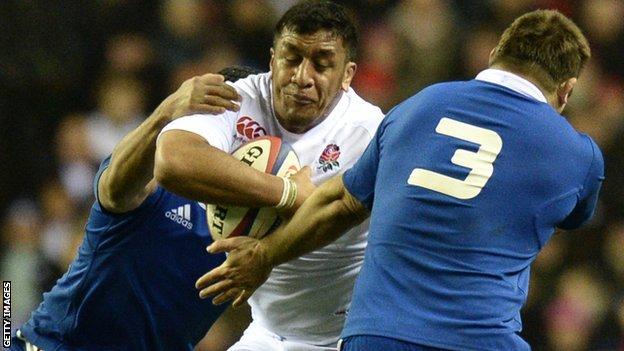 Replacement flanker Tom Croft is in the squad for the first time in 11 months following a serious neck injury.

The other changes in the starting XV are half-backs Toby Flood and Danny Care, while there are also recalls for forwards James Haskell and Tom Youngs.

Mako Vunipola's younger brother Billy misses out on a place on the bench.

Flood comes in for the injured Owen Farrell, with Freddie Burns called into the replacements.

Haskell and Tom Youngs replace Courtney Lawes and Dylan Hartley respectively, with the Northampton pair dropping to the bench, where they are joined by Joe Marler and Ben Youngs, who both started in the win against France.

England go into the game top of the table, having won three games in a row.

The victory over France in the last round ensured they remain on track for a first Grand Slam in a decade, and boss Stuart Lancaster always intended to "freshen up" the side in the penultimate round of the 2013 Six Nations.

"We were very happy with the way we finished the France game," he explained. "The impact the replacements made shows that we have competition for places across the board and we have had to make some tight calls.

"Danny Care has waited patiently for his opportunity. In freshening the team up, sometimes when you have a guy who is desperate to play that can help the team.

"They [Care and scrum-half rival Ben Youngs] are unbelievably close. They are both high-quality players, in great form and in great condition and pushing each other.

"Mako has thoroughly deserved his chance and we are looking forward to seeing how he goes."

Billy Twelvetrees is among the replacements after Lancaster decided against shifting centre Manu Tuilagi to the wing and benching Chris Ashton.

Italy, who have recalled captain Sergio Parisse, started the tournament by defeating France, and Lancaster cautioned against writing off the visitors.

"Parisse coming back is a huge psychological lift and it adds a huge amount in terms of experience," said Lancaster.

"All things point towards Italy putting in a strong performance and we have to be ready."

Mako Vunipola, 22, who was born in New Zealand, and Billy, 20, born in Australia, are sons of the former Tonga captain Fe'ao.

When they first moved to Britain they lived in Wales before subsequently relocating to England. Both could have played for the Welsh alongside cousin and number eight Toby Faletau.

Mako Vunipola said making his first start will be "a great occasion for me and my family".

Speaking before the selection announcement, he added: "The dream for us is to be out there together for my family. Hopefully one day that will happen."

England's points difference is currently 17 better than nearest rivals Wales, whom they face in the final round of the championship in Cardiff next Saturday.