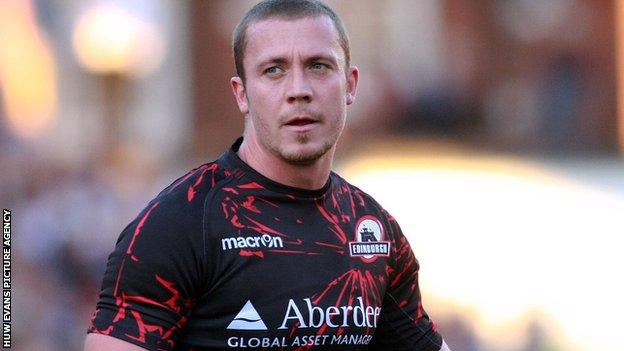 Newport-Gwent Dragons have signed scrum-half Richie Rees on a two-year contract from Edinburgh.

The former Wales number nine moved to Murrayfield from Cardiff Blues at the end of the 2011-12 season.

Rees, 30, has been capped nine times by Wales, including three starts, but has fallen down the pecking order behind Mike Phillips and Lloyd Williams.

"We are delighted to be signing a player of Richie's calibre," said Dragons head coach Darren Edwards.

"Richie is a proven competitor on both the international and regional stage and has desire to come to the Dragons to make an impact.

"It has been well documented that we have a great deal of potential at scrum-half in Jonathan Evans and an experienced game controller in Wayne Evans.

"But we are looking to strengthen and make many positions in our squad competitive to improve our performance."

Rees, who joined Edinburgh along with Blues prop John Yapp, said he was delighted to be returning home to Wales.

"I'd like to thank the coaches, staff and fans of Edinburgh Rugby for their support this season," he said.

"I've made some great friends here and there's a lot of talent who have the potential to be top class, and I'd like to I wish them all the best in the years to come.

"I remain totally committed to the club for the remainder of my contract and look forward to returning to Wales and joining up with my new club mates in a very ambitious Dragons side."