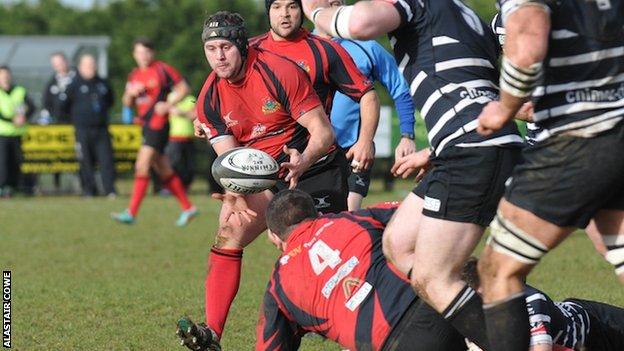 Redruth's promotion hopes from National Two South took a big blow after they lost their perfect home record after a 26-19 defeat by Hartpury College.

The Reds trailed 21-0 just before half-time but rallied in the second period.

"At 21-0 down we could have feared the worst, but we showed tremendous fighting spirit in the second half," boss Adrian Edwards told BBC Cornwall.

"They were a very good outfit with some quality players and they just played better than we did."

Tries from Liam Wilkinson and Craig Jackson, as well as three penalties and a conversion from Jackson, put the visitors ahead.

Lewis Vinnicombe went over for a try just before the break, but Wilkinson got his second for Hartpury seven minutes after the restart.

The Reds forced a penalty try to make it 26-14 before Murray Westren went over late on for a consolation.

"They're a very good side and probably allowed them too much time, they crossed the gain line every time and they bossed the game," Edwards added.

"It's been a brilliant season so far, we've had so many cracking games here.

"It is difficult when you lose your home record but sometimes it's how you lose, and we lose with pride in the shirt."