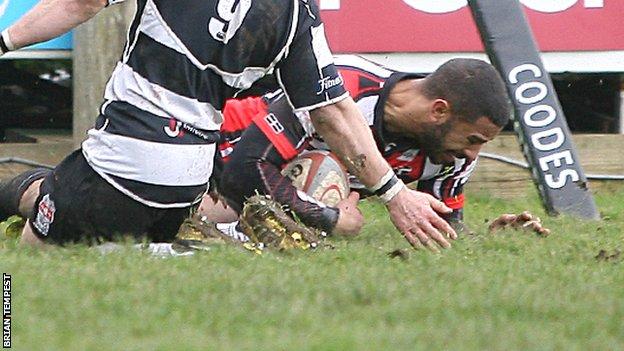 "On the whole it was probably one of the best defensive efforts of 2013," Davies told BBC Radio Cornwall.

"We defended well to keep them out and defend what they were trying to do which was try to push us over."

Matt Evans scored Pirates' opening try after 14 minutes in between two Oliver Thomas penalties as the home side trailed 6-5 at half-time.

They fell further behind to a third Thomas penalty shortly after the restart, before Smith went over twice in four minutes to get his first tries since joining on loan from London Welsh last month.

Ethan Waller went over for Moseley with 20 minutes left to set up a tense finish.

"A win's a win, confidence is not particularly high in the camp after the last couple of games," Davies added.

"But it was good that the boys were still disappointed after they won.

"I'm pleased for Ashley [Smith] because he's working hard in training and he's got his chance.

"He could have scored at Leeds last week and he was disappointed that he didn't, but he looked sharp."