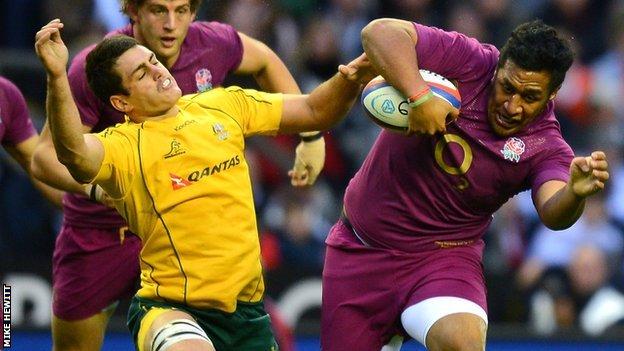 It's all change for both sides on Sunday, although England fans will be hoping one thing remains the same come the final whistle, namely England's unbeaten record both against Italy and in the 2013 Six Nations.

The two sides have met 18 times over the years with England winning all 18, and with Stuart Lancaster's side going into the game top of the table and three-fifths of the way to a first Grand Slam for a decade, you can get handsome odds at the bookies on Italy to win.

The most notable of England's five changes is the decision to hand wrecking-ball prop Mako Vunipola his first start.

Italy will be breathing a sigh of relief after Sergio Parisse had his ban reduced by 10 days, and the returning captain is one of seven changes, plus one positional, as the visitors try to rediscover their mojo from the opening weekend.

There's no doubt that the biggest change for England - both metaphorically and literally - is the addition of Vunipola to the front row in place of Joe Marler.

The Saracens prop - 20 stone "on a good day" and son of former Tonga international Fe'ao - is an explosive and destructive runner who gives England powerful go-forward that makes clearing ruck ball easy because the defenders have been blasted out of the way.

Stuart Lancaster will be keen to see if Vunipola will have the energy to keep going after 50 or 60 minutes, because his fitness has been questionable in the past, and he's also been prone to giving away silly penalties.

For Italy the biggest call is a no-brainer - the return of number eight Parisse.

He is still one of the best players in the world and there's no doubt his return will bring more confidence to the Italians, who seem emotionally drained after their win over France on the first weekend.

It's a toss-up for the England number two shirt at the moment between Tom Youngs and Dylan Hartley, and the former gets another chance to state his case on Sunday.

We can't blame him solely for the poor English line-out stats so far this tournament and Geoff Parling, who runs the line-out, has already come out and said he takes some of the blame for making bad calls.

But Youngs still has to hit the target and the hooker has not always managed that this Six Nations - he only has a 67% line-out success rate compared to 89% for Dylan Hartley this tournament - while the Leicester man has also been prone to giving away unnecessary penalties.

Tight-head prop Dan Cole has conceded the most penalties for England with seven (it must be a tight-head thing because he tops the Championship penalty table with Wales' Adam Jones) and Tom Youngs is second with four.

The good work he does carrying will be negated on Sunday if he gives away silly penalties.

All change at half-back

Danny Care will add the whizz, bang, wallop from scrum-half but he mustn't try and do it all on his own.

To impress Lancaster the Harlequins nine, who gets a start with Ben Youngs dropping to the bench, must be accurate with his box kicking and serve the ball to fly-half Toby Flood on a plate.

If Care bides his time the space will open up in front of him and he will get the chance to exhibit his special talents, not least his pace - he's made the second most metres (342) of any scrum-half in the Premiership this season.

With Owen Farrell injured, Flood has been given the chance to run the show on Sunday.

Flood has been almost a forgotten man and I have a feeling that had Freddie Burns been fit at the start of the Championship, Flood might not have made the bench ahead of him for the first three games.

We must give credit where credit is due and Flood has come on and performed very well, closing out matches and finishing the opposition off with good decision making.

But Flood can only play as well as the ball that is delivered to him, if it's as poor as it was against France in the first half England will still struggle on Sunday.

After dominating the breakdown in the first two games, England struggled in the first half against France in that area.

In the opening two matches England's ball carriers were very aggressive - aiming to run beyond the tackle - and that made it harder for the tackler.

By really attacking the line, the runners' momentum took them beyond the gainline and made it easy for the support runners to clear out the defenders in one movement.

If you don't have that momentum you're in trouble. You can still get the ball back, but not as crisply, and it slows the momentum of the attack.

England often went alone against France, without supporting players and with less aggression than previously.

That meant the likes of France flankers Yannick Nyanga and Thierry Dusautoir were straight onto the ball. They're very hard to get off and that led to slow ball.

In the second half England sorted it by running hard - the likes of Vunipola, Manu Tuilagi and Youngs can all make those kinds of carries against Italy - and making sure the support was close at hand, and they need to do that on Sunday.

Will England dominate the scrums?

The much-vaunted Italian scrum struggled against Wales but anyone expecting England to demolish them shouldn't count their chickens.

It wasn't so long ago everyone was saying Wales' Gethin Jenkins and Adam Jones were the two best props in the world and on their showing a fortnight ago it seems as though they're both finally healthy, fit and firing once more.

Italy may have struggled last time out but they have too much experience in the likes of tight-head Martin Castrogiovanni to just write them off in the scrums.

It will also be interesting to see how Vunipola goes here. He's a great impact player, can he do it from the start?

Battle of the boots

With England's defence and kicking game - the likes of Mike Brown and Alex Goode have much bigger boots than their opposite numbers in the back three - it's hard to see Italy making huge in-roads and gaining enough territory to pressurise England.

With Goode and Brown at the back marshalling any aerial attack and returning with interest, Italy will have to carry the ball without making errors in order to make territory, which is a big ask, especially if it is wet.

If there are good conditions on Sunday I'd like to see full-back Goode stride out a bit and take on a defender or two. If he beats that first defender he should have Chris Ashton on his shoulder to carry the move on.

You look at this game and see Italy fighting hard for 50 or 60 minutes and then sliding off the pace and England moving away in similar fashion to the way they did against France.

If the weather is good then England should up the tempo to tire the Italians quicker.

Italy have not managed to rediscover the belief and brilliance they showed against France in the opening game, which is a real shame.

They pulled off a 15-man performance that day and dominated that game. The fly-half that day, Luciano Orquera, is back after being dropped for the loss to Wales.

He was superb against France but who knows if he'll ever play like that again.

Prediction: England to win by plenty, provided it's dry.