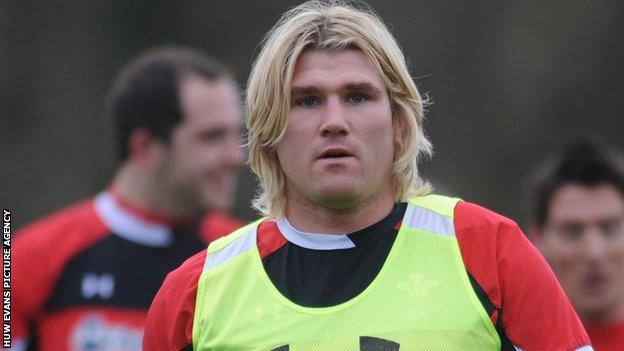 Johnson questioned Hibbard's fitness levels during his time as Ospreys director of coaching.

But the Australian says Hibbard, 29, has "turned his life around" and is worthy of his place in the Wales side.

"He is a quality Test player - he always was and is a Lions shout," Johnson said.

Hibbard starts for Wales against Johnson's Scotland in the Six Nations at Murrayfield on Saturday.

In January 2012 Johnson said Hibbard had fitness issues after he was left out of Wales' 35-man Six Nations training squad.

Hibbard admits the criticism hurt but this week thanked Johnson for providing the "kick up the backside" that has spurred the player to become Wales' first-choice hooker.

"The events surrounding Richard is that he didn't get picked and the WRU told him why - he wasn't fit enough," Johnson tells BBC Radio Wales' The Back Page programme, which will be broadcast at 08:30 GMT on Saturday.

"I had a duty and a care as a coach not to lie to him. They were the facts.

"And it's nice to see him turn his life around because he should have been, and always was picked locally, picked in front of incumbent Test players.

"We had a massive regard for Richard as a player. Their [Wales] set pieces are better for him being in it.

"I know what I'm up against, but we've got a pretty good front row too.

Wales' starting line-up at Murrayfield on Saturday includes eight players whom Johnson worked with during his time with the Ospreys.

Among them is fly-half Dan Biggar, a player who although long championed by Johnson has previously been largely ignored by the national team.

"I love what Dan stands for as a bloke. I'm really proud of his achievements and am really glad to see him back in his rightful position," added the former Wales caretaker coach.

"It speaks volumes for the human side of things that people don't see in this sport.

"As a coach it's hard not to acknowledge, and like, so many qualities Daniel has. The irony is, for the very first time, I'll be cheering against him.

"But it's a privilege to say I've been part of his life and it will be great to catch up with the lad."

Hear the full interview with Scott Johnson on The Back Page, Saturday, 9 March at 08:30 GMT, BBC Radio Wales.