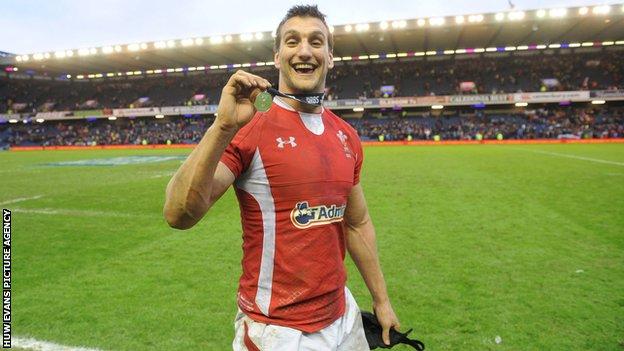 Man-of-the-match Sam Warburton denied he felt he had a point to prove in Wales' Six Nations victory at Murrayfield.

Wales ground out a 28-18 win over Scotlandto keep their championship title hopes alive.

"I did not really feel I had a point to prove, I just wanted to get straight back in and make sure we won," said Warburton.

Wales host England at the Millennium Stadium on Saturday, 16 March.

Flanker Warburton did not start Wales' wins over France and Italy but his return to the starting line-up saw him produce one of his best performances of the season.

"It's a brilliant win and we are so pleased. We knew it would be tough as it is always tough up here but we are delighted with the win," said Warburton.

"We are lucky to have a fantastic squad which is very competitive and I am glad to be back in a winning team."

Warburton missed Wales' 16-6 win over France in Paris due to a neck injury and was selected on the bench for the 26-9 win over Italy in Rome.

Ryan Jones, who went off with a shoulder injury at the start of the second half against Scotland, replaced Warburton as Wales captain and skippered the side in Murrayfield.

Wales' victory was a record fifth away win in the tournament for the 2012 Grand Slam champions, who lost their opening match to Ireland.

They now face a potential title-decider at the Millennium stadium next Saturday against unbeaten England, who host Italy at Twickenham on Sunday.

Wales hooker Richard Hibbard scored the only try of a scrappy match at Murrayfield, which was dominated by the Welsh forwards.

Wales full-back Leigh Halfpenny kicked a conversion and seven penalties, while Scotland scrum-half Greig Laidlaw, the hero of the home victory over Ireland in the previous round, replied with six penalties.

Wales now have three straight wins in this season's tournament after their opening defeat to Ireland in Cardiff and have not conceded a try since that game.

They now face the prospect of hosting an England side who will be going for the Six Nations title in the Welsh capital, and probably the Grand Slam if they see off the Azzurri.

"(Assistant coach) Shaun Edwards has emphasised our defence every week, he is a superb defence coach and he wanted us to stop Scotland, and we are delighted to have gone another game without conceding a try," said Warburton.

"We have 24 hours to relax and then we will start looking forward to England on Monday."