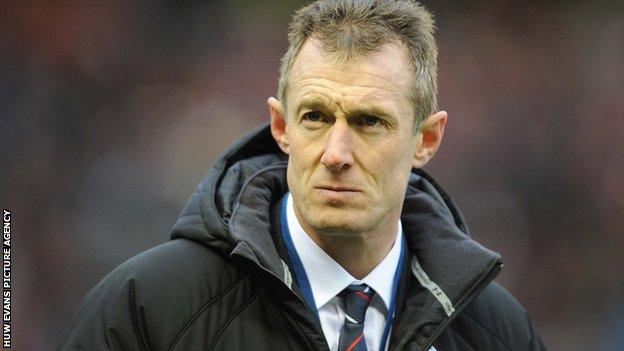 Wales kept alive their hopes of retaining the RBS Six Nations title with their 28-18 win over Scotland at Murrayfield.

"They will have a nice warm welcome at the Millennium Stadium," said Howley.

England travel to face the reigning Six Nations champions Wales on their home patch on 16 March.

Howley's side recorded their sixth successive victory over the Scots to move level on points in the Six Nations with Grand Slam-chasing England, who host struggling Italy on Sunday.

England have a seven-point advantage over Wales in points scored, with Italy to come, but the Millennium Stadium showdown already promises to be a tournament finale.

"England are a very good side and it's great it has come down to the last game of the championship," said Howley.

"We are delighted we have been able to refocus and gain momentum in a championship which is so important after the disappointment of the first-half display against Ireland.

"To come away from the last three games, which were away from home, and win is a credit to the players and the coaching team."

Wales have now won a record five successive championship away games, with Scotland going the same way as France and Italy in recent weeks by failing to score a try in defeat to Wales.

Howley's only loss so far in this season's tournament was the 30-22 defeat to Ireland in the Six Nations opener in Cardiff.

"This is the fifth time this group of players have come away from home and won.

"That shows a lot of character, a lot of team spirit which is what you need when you come away from the Millennium Stadium.

"To come here against a very good Scottish side, who came into the game with quite a bit of confidence with two wins under their belt, it was always going to be attritional battle.

Scotland's scrum-half Greig Laidlaw replied with six penalties from eight attempts for Scotland, but it was another try-less experience from the home side's perspective after Laidlaw's boot saw them home against Ireland two weeks ago.

Wales even kept Scotland at bay when they were down to 14 men, after prop Paul James was sin-binned two minutes from time.

The only Welsh concern was the sight of captain Ryan Jones walking off clutching his shoulder on the 48th minute but his injury will be assessed over the next 48 hours.