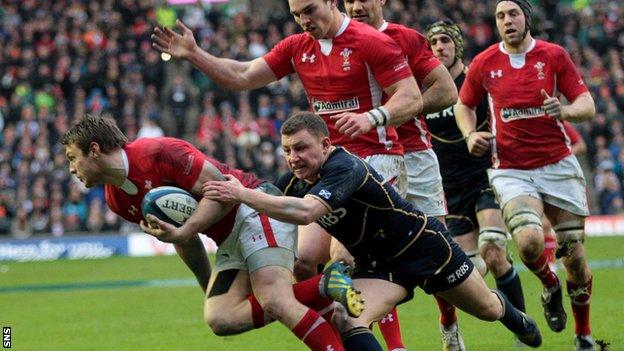 The home side grew increasingly annoyed by the South African official's handling of a scrappy match.

But Johnson said: "I am frustrated but I have said in the dressing room we have to acknowledge our ills.

"It is easy to criticise one man, but we have to look at ourselves and understand what we are doing wrong."

Scotland's points came courtesy of six penalties from scrum-half Greig Laidlaw, in a game dominated by the whistle of Joubert.

"We showed great heart and great resolve but we have to look at ourselves rather than at anyone else," continued Johnson.

"I don't want to coach a side that apportions blame to someone else, we will go back and have a look and if we have to make changes we will do so, but we will go to Paris next weekend to compete."

With Joubert in a fussy mood, both teams were under pressure to play by the book.

But Scotland, chasing a third consecutive win, infringed far too often, while the Welsh managed to keep level heads at crucial moments.

"We're hurting, we feel that sometimes the penalty count is not indicative of what we're doing," added Johnson, who watched the home side struggle to carry the ball with any threat until the closing stages.

"We wanted to compete in certain areas of the game and we haven't been able to do so. It's really killed us.

"But we need to move on and hope that someone views it differently next time.

"When we get it right, we've got a quality team.

"I keep saying it; we have the ability to put teams to bed but we have to get the first bit right and we're not.

"We don't want our mirror to lie. Our mirror is going to be clean."

Scotland end the tournament with a trip to Paris and lock Richie Gray is likely to miss out, having suffered a hamstring injury.

And problems persist at fly-half where Duncan Weir struggled on his full Scotland debut surrendering more possession than was needed from the boot.