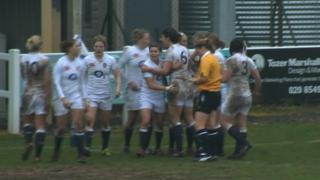 Watch highlights as England's women's return to form with a 34-0 win over Italy, after losing their previous two games against France and Ireland.

Prop forward Roz Crowley scored two tries as England moved into second place in the championship ahead of next week's final round of matches.

England face Wales next weekend while Ireland, having already secured the championship, will go for a Grand Slam in Italy.