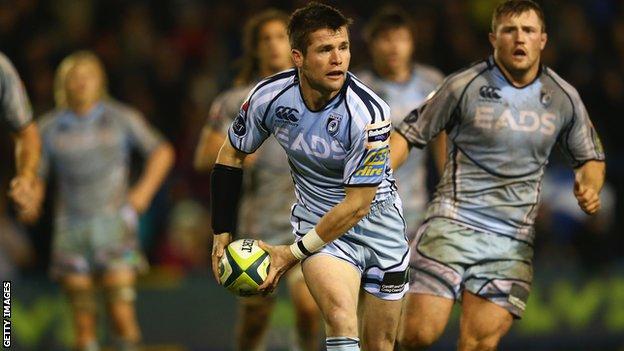 Cardiff Blues and Wales fly-half Ceri Sweeney is to join English side Exeter.

"I'm really excited about the move," said Sweeney, who will replace

"Exeter are a fantastic club. As soon as I heard they were interested in me, I was keen to talk to them and have a look around the place," he added.

"Like a lot of people I've watched how they have risen over the last few years and how they've made a real name for themselves, not just in the Premiership, but also in Europe as well.

"It's an exciting move for me and for my young family and it's a fresh challenge.

"I know it will be the first time I've played club rugby outside Wales, but the thought of testing myself in the Premiership is something I'm really keen to do."

Sweeney, who joined Cardiff Blues from Newport Gwent Dragons in the summer of 2008, helped the club win the 2009 EDF Energy Cup and the Amlin Challenge Cup a year later.

He made his Wales debut against England in the 2003 Six Nations, playing three times in the World Cup later the same year.

He also featured in the 2007 World Cup, making his last international appearance against South Africa in Cardiff in November 2007.

"We've looked at a lot of people and done a great deal of research, all of which has led us nicely to Ceri," said Baxter.

"We feel, having looked at him and having also spoken to him, he ticks all the boxes for us.

"We think he will be a great addition to the squad for next season and that he will complement well our own two fly-halves, Gareth Steenson and Henry Slade.

"Not only does he come with a great deal of experience at an international level, but he's also run teams through Heineken Cup seasons and played in some very big matches over the years.

"What we also like about Ceri is that he is still very hungry and that he sees the challenge of coming to us a big opportunity in his career."