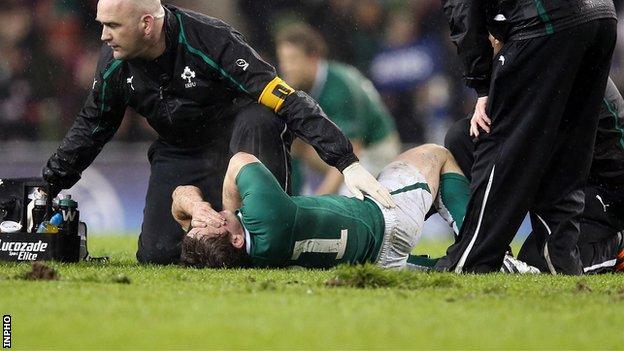 Ireland scrum-half Eoin Reddan has been ruled out for three months after suffering a broken leg in Saturday's Six Nations match against France.

Replacement Reddan fell awkwardly beneath a tackle in the final minute of a compelling 13-13 draw and was given oxygen before being carried off.

Both are doubts for the closing match away to Italy next Saturday.

"We took a conscious decision that we would not complain about things," he said.

"Other people are worse off than we are, plus it is such an insult to the lads coming on and having a huge go.

"We are frustrated, but there are lads coming in who have no experience at this level under their belts and are doing such a good job for us.

"On any given day Paul O'Connell, Tommy Bowe, Stephen Ferris and Jonathan Sexton would be in the running for a Lions spot.

"I have never experienced an injury run like this, but you work your way through and I spoke to Jamie Heaslip about it and we agreed not complain."