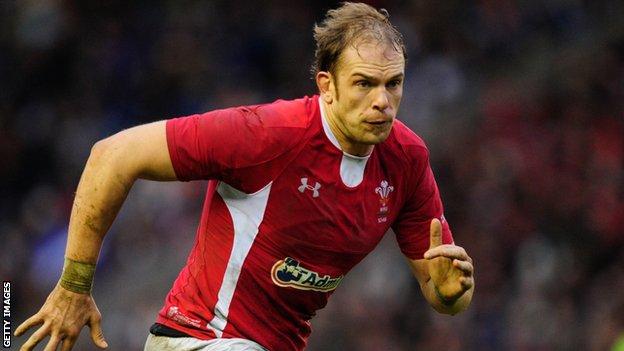 Jones is a doubt with a shoulder injury which forced him off in the win over Scotland, when Sam Warburton took over.

But Williams believes lock Alun Wyn Jones, not Warburton, should skipper the side if Ryan Jones is unavailable.

"I'd let Alun Wyn captain the side next week if Ryan doesn't make it," said Williams, who won 100 Wales caps.

"[It would] take the pressure off Sam [and] just say 'go out and cause chaos in the breakdown'.

"Rob Howley said himself he's had a tough few months. Let Sam concentrate on his game.

"There's going to be enough media hype this week and [Sam should] just do what he did [against Scotland] and concentrate on playing his own game."

Lock Alun Wyn Jones and Warburton returned to Wales' starting line-up against Scotland and Warburton was man-of-the-match in the 28-18 win at Murrayfield.

Cardiff Blues flanker Warburton did not start in the wins over France and Italy but returned in place of Justin Tipuric against the Scots.

Despite the return of Warburton, Ospreys forward Ryan Jones retained the captain's armband against the Scots, having skippered the side in France and Italy.

But Jones is a doubt for Saturday's final game against England in Cardiff after he injured a shoulder early in the second half.

Wales' most-capped forward Williams - he made 100 Test appearances for his country - fears Ryan Jones will miss out.

"I'd be amazed [with a] shoulder injury to turn around in six days to be fit to go," Williams told BBC Wales' Scrum V programme.

"You never know with the physios and injections."

England's 18-11 victory over Italy at Twickenham means a win against Wales in Cardiff next Saturday would seal a first Grand Slam in a decade.

But a Wales victory by eight points or more, providing they stay ahead of England on tournament tries, would see Rob Howley's men retain the title.

Williams, a Grand Slam winner in 2005 and 2008, believes Wales are capable of denying Stuart Lancaster's side.

"I think they'll have to change the way they play because physically England will match them."