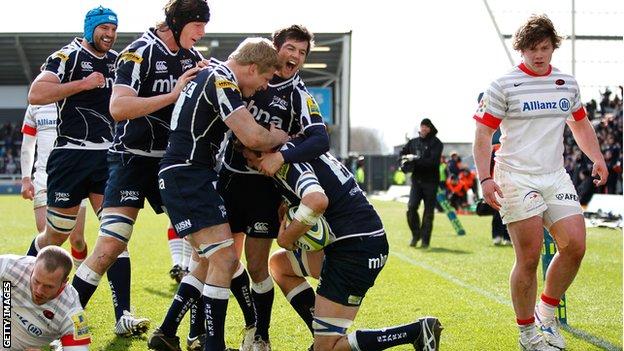 The Sharks, who will now face Harlequins, beat Saracens 21-15 to reach a final for the first time since they won the Premiership in 2006.

The result followed news that London Welsh's points deduction had lifted Sale off the bottom of the table.

"We'll go down there, have a good day out and then concentrate on the last five weeks of the season," he said.

Steve Diamond's return as director of rugby at the start of 2013 has coincided with Sale's best run of form this season.

"We've got Harlequins who are a top side and they beat us comprehensively two weeks ago so we're not counting our chickens."

Diamond continued: "It's quite ironic isn't it? We've just got off the bottom of the league and we've got to a final, and a bit of luck has swung our way.

"What's happened with London Welsh is good fortune for us in one respect, but if you don't abide by the rules that's what happens.

"We just need to compound it by winning the remainder of our games. We've got three league games at home, London Irish and Northampton away and we need to go in and finish in the Premiership on our own merits."

Sale have won just four times in the Premiership this season which had seen them sit bottom since October, until Welsh's five-point penalty saw Diamond's side move up to 11th, two points above the Exiles.

But the Anglo-Welsh Cup has proven to be a welcome distraction, with four wins in their five games to progress through to Sunday's final at Worcester's Sixways stadium.

"Not only has it been good for us to build confidence, you get more money in this than in any other competition, so it's good financially for the club," Diamond told BBC Radio Manchester.

"The final brings a lot of reward with it, not only for the players and it's an achievement as there is a Heineken Cup place on.

"I know we're around bottom at the moment but if you can get to a Heineken Cup spot through one of the other channels, you take it."