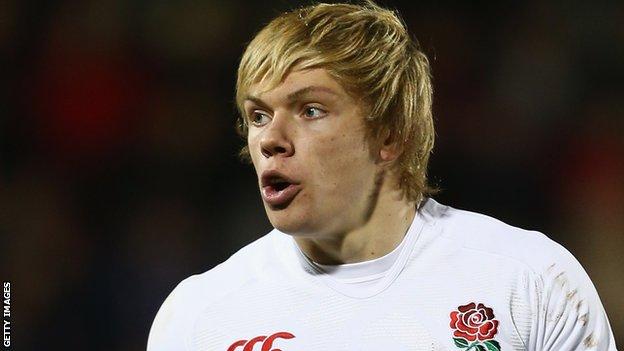 Sale scrum-half Nathan Fowles cannot wait to sample the big-match "buzz" if he keeps his place for Sunday's LV= Cup final against Harlequins.

The Rochdale-born 19-year-old scored his first try for the Sharks in their 21-15 semi-final victory over Saracens.

"I've never played in a semi-final, so to do it with the first team is massive," he told BBC Radio Manchester.

"I've been stood in the stands since I was a young lad, so to be out there and getting to the final is just a buzz."

The England Under-20 number nine has made a breakthrough this season after progressing through the Sharks academy, making his first-team debut as a substitute against Bath last September.

His first start followed in October in the Heineken Cup game against Cardiff and he has been praised by head coach Bryan Redpath, a former Scotland scrum-half, for the way he has adapted to senior rugby.

"I'm looking forward to the final next week as I'm only 19 and to have this feeling now spurs you on for the rest of your career," Fowles added.

"I've had quite a bit of game time and it's just all about development at this stage for me.

"The squad have stuck together really well and we've got to go through the hard times and obviously now we can have some good times together.

"It has been a difficult season, but now we can give the fans something back and it's something for them to look forward to."