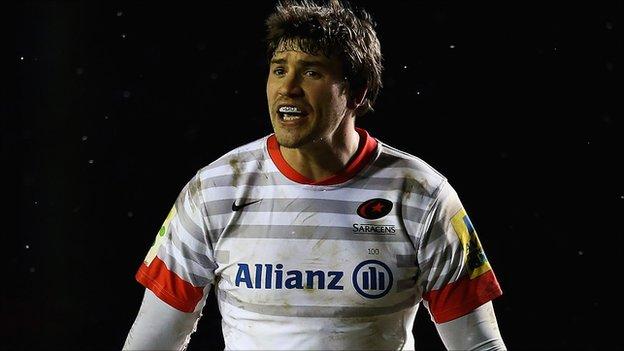 The 26-year-old agreed the terms of a switch to Kingston Park in February but delayed his arrival until the Sarries' cup commitments were completed.

"I've had a great time at Saracens," Powell said.

"I'm really excited by what is happening at Newcastle under Dean Richards. I can't wait to get started."

Powell, who ended an eight-year stay with Saracens to join Newcastle, will be in line for a debut at Nottingham on 22 March.

Falcons director of rugby Richards added: "I am delighted to be able to publically welcome Adam to Kingston Park.

"He is a quality player and a solid acquisition to our midfield as we prepare for the end of season play-offs and the final push towards our ultimate goal of a return to the Premiership."

His arrival at Newcastle follows that of former team-mate Noah Cato, whose debut try helped Falcons to a 17-15 win against Bedford on Friday.