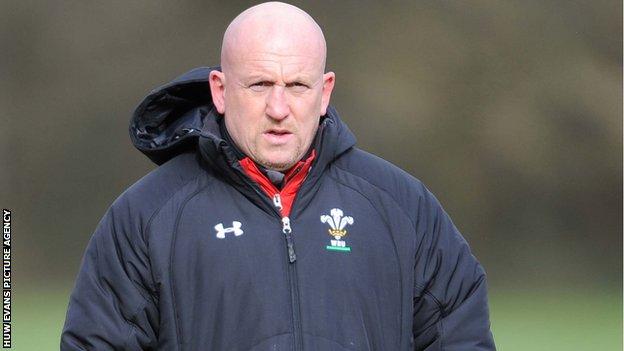 Defence coach Shaun Edwards has backed Wales' big game experience to come to the fore but dubs England as "favourites" for the Six Nations title-decider.

If Wales win by eight points, they will deny England a Grand Slam and win the Six Nations title.

"I am pleased we have had the experience of being in big games before," said Edwards.

Edwards was part of the Wales coaching set-up who won the Grand Slam in 2008 and 2012 and led Wales to a semi-final in the 2011 World Cup in New Zealand.

Meanwhile England have not won a Grand Slam since 2003 and coach Stuart Lancaster has assembled a new-look side very different to the one knocked out at the quarter-finals stage at the same World Cup.

England come to the Welsh capital having won all of their games in the tournament so far, but did struggle to a 18-11 win over Italy at Twickenham on Sunday.

Edwards has pinpointed Wales' experience of those pressure-cooker games and being able to handle the big-game atmosphere expected at the Millennium Stadium as the key difference between the two sides.

A dozen of Wales' likely starting side sealed the 2012 Grand Slam with victory over France. Gethin Jenkins, Adam Jones and Ryan Jones played in the 2005,2008 and 2012 matches, while Mike Phillips, Alun Wyn Jones and Ian Evans featured in the last two.

"We have played in a World Cup semi-final and I am really hoping that that experience will really help us come Saturday.

"It really is a huge game."

Edwards is under no illusions about the task facing a Wales side which has bounced back from their opening 30-22 defeat to Ireland to beat France in Paris, Italy in Rome and Scotland in Edinburgh.

But the former Heineken Cup-winning coach with London Wasps has dubbed his fellow countrymen as favourites for the Millennium Stadium clash.

"They are well aware there is a lot of expectation and a lot of pressure on them. England haven't had a Grand Slam for 10 years, which is a long time, but we are concentrating on ourselves.

"I really hope that experience of being in big games before will help us."

Edwards has dismissed the suggestion that Saturday will be one of the biggest games to be staged at the Millennium Stadium, and believes victory over France to clinch the 2012 Grand Slam was bigger for Wales.

"It's not as big as last year's Grand Slam game because we cannot get a Grand Slam," he added..

"But we can still win the Six Nations. Last season was a pretty big game against France to win the Grand Slam.

"There has been a history of big games in Cardiff recently because we have won three Grand Slams in the last eight years."