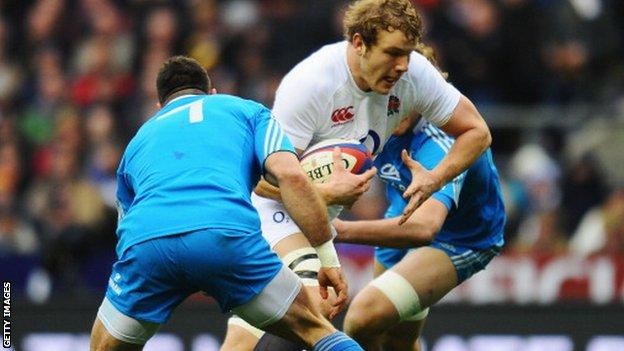 England are optimistic locks Joe Launchbury, Geoff Parling and Courtney Lawes will recover from injury in time for Saturday's match with Wales.

Owen Farrell, who missed the win over Italy because of injury, is training and could be restored at fly-half.

But number eight Ben Morgan has been ruled out of the Six Nations decider at the Millennium Stadium.

Morgan injured his ankle against Scotland but had been pencilled in to return before the end of the campaign.

England head coach Stuart Lancaster said: "Ben will stay at Gloucester this week. We knew his ankle would take six to eight weeks and he won't make it in time.

"We're going to miss Ben, which is disappointing for him having worked so hard to be fit."

Farrell, suffering with a quad injury, watched from the stands as England stuttered to a 18-11 victory over Italy to keep alive their hopes of a first Grand Slam since 2003.

The fly-half has been in fine form during England's unbeaten Six Nations campaign and his return would be a boost to Lancaster, as would the availability of Launchbury, who left Twickenham on Sunday with his arm in a sling after injuring his elbow.

Parling, who departed the field with a shoulder injury on Sunday, and Lawes (arm) are also expected to be available for the Cardiff match.

Lancaster will name his starting XV on Thursday.

"With a six-day turnaround you're not going to make a huge number of changes at this point of the championship," Lancaster told BBC Sport.

"We're hopeful [over Launchbury, Parling and Lawes] but we're not definite at this point so we'll see how that goes.

"We've got Owen Farrell back in the equation, which is pleasing, and we've got other lads who have been waiting patiently.

"We'll make those decisions in the next 24 hours. We've only got one training session before we announce the team on Thursday and head to Cardiff."

An eight-point victory for Wales on home soil would give them the championship, although a seven-point margin could also be enough.

If the teams end with the same points difference, the title would be decided on tries scored - so far Wales have scored two more than England.

"We have had a chance to review the [Italy] game and there were lots of areas we were pleased with, but we've definitely got plenty to work on," added Lancaster.

"Wales is a massive game because of the context of the result, which is huge for both teams.

"We're a young team and a lot of our players haven't played there before, so going to that type of environment is exactly the test we want."

Of England's likely starting line-up, 10 have yet to experience playing at the Millennium Stadium. Nine of the match-day squad played in their 26-19 victory in Cardiff in the 2011 Six Nations.