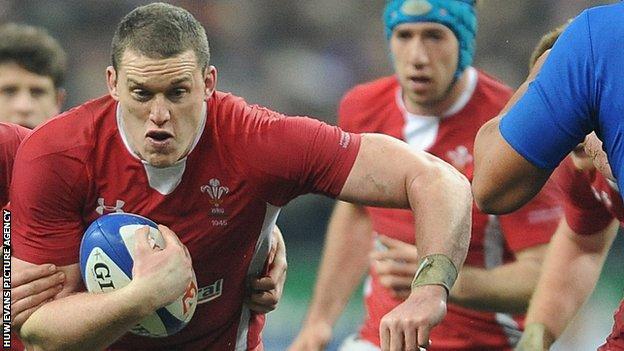 Lock Ian Evans believes Wales have "rescued" their Six Nations campaign with three battling away wins to give them a chance of retaining the title.

At the start of the championship Ireland became the fifth successive team to beat Wales in Cardiff.

Wales have since won away against France, Italy and Scotland and face Grand Slam-chasing England in Cardiff on Saturday.

"I just hope our first game doesn't come back and bite us on the backside, really.

"We've rescued the situation, got control back and it leads up to the last game now in the Millennium Stadium."

Wales went into the Six Nations having lost seven successive Tests, including defeats in Cardiff by Argentina, Samoa, New Zealand and Australia.

Interim head coach Rob Howley's side reacted to those disappointments and the opening defeat by Ireland with a gritty Six Nations win over France in Paris.

Similar efforts brought victories in Rome and Edinburgh, the latter to set up Saturday's tournament showdown.

"We've rolled our sleeves up and it has all been about coming away with the wins," said Evans.

An England defeat by six points or fewer would still be enough to SEAL THE TITLE.

It would be the same outcome if England lose by seven points but outscore Wales by three tries or more.

A Wales victory by seven points, providing they stay ahead of England on tournament tries, would see Rob Howley's men RETAIN THE TITLE.

"It is not about how pretty it looks, it has been about being dominant and getting the win.

"We should have won that game, from my point of view.

"It was too late to catch up in the second half. But we've had three massive wins since then.

"When people start writing you off, Welsh players tend to stand up and be counted from what I can see."

Wales last won in Cardiff against the Barbarians in June, 2012.

But their previous win against a major Test nation came against France in March, 2012 to

Their 2013 campaign has centred on regaining winning form following the loss to Ireland in February.

hopes he and his fellow backs can add some attacking polish to their defensive durability.

"Our last three results have been based on a solid defence," Roberts said.

"The three games have been defensive games when conditions dictated.

"We've defended very well. To not concede a try in the last three games is pretty pleasing, but we will be facing a different animal next weekend.

"As a back-line you want to be able to show what you can do and maybe over the last three games we haven't had a chance to do that.

"Hopefully, next weekend, we can display that.

"As I say, we've gone up to Edinburgh and won and everyone is really happy, but we know next Saturday goes up another level.

"Across the park, it is a magnificent Test match. England coming for a Grand Slam in Cardiff is the stuff we dream of playing in as Welsh players."