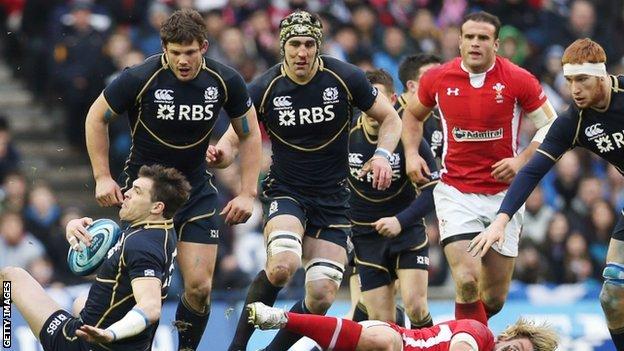 Anyway, back to the Scotland Wales match. I didn't see it live as Brive had a match - played under the sun in 18 degrees - at the same time.

I asked my brother in a text message how the game went. He replied: "awful game, ref killed it, nothing happened, will be difficult to analyse!"

I've since watched the game twice and this is what I've come up with.

Wales showed their intent from their first set-piece. One pass play off the line-out and then pick and go around the fringes.

They wanted to 'out-physical' and 'out-work' the Scots, pressurise the kickers and push hard in defence. There was a bit of bite about this Welsh performance.

And Scotland's response? They again looked to play the wet conditions conservatively.

A mixed kicking game with Duncan Weir having a very rounded performance with the boot: chip-kick, cross-kick and siege gun touch finders a plenty.

But we didn't really see any phases of play until the 58th and then the 75th minute, where the Scots attack actually looked pretty dangerous.

But for a silly penalty given by Jim Hamilton with 40 minutes on the clock they would have had the lead.

Jim's made many scrum-halves' life a misery around the fringes but unfortunately this was not the time nor the place for this decision.

The problem with the way Scotland have approached these last two games though is that if the game is not won then people will talk about preferring to see Scotland throwing the ball around and losing, than playing tight and losing by fewer points.

Much has been spoken about the scrummage and rightly so. It was totally depowered by the amount of penalties and free-kicks (only three scrums the entire game didn't result in a penalty or free-kick).

Scotland weren't given the opportunity to scrummage and they are of the opinion that they have a world-class scrum.

Apparently this was recognised by the Welsh coaching staff and in particular the efficiency of engagement; the scrum isn't just who can push the hardest or is the most powerful.

Dean Ryan spoke all week to the players about Wales not winning scrums by power, but by winning scrums on intelligence. Forwards, often known affectionately as the 'donkeys' have to play a clever game when the set-piece is called.

It's all about who 'wins the hit' - when the engagement of the front row occurs, who has taken the most space.

For Scotland to be free-kicked four or five times for early engagement is pretty much unheard of and whenever there is an uncommon trend there must be a reason.

The Welsh timing is controlled by Adam Jones and if he is comfortable they will engage, but if not they second guess the referee by delaying slightly or absorbing the engagement making it look like Scotland jumped the gun.

The Welsh pack had Craig Joubert on their side right from the first minute and a result played on it and fair play to them: there is more than one way to skin a cat.

The key moment in the game for me was the call of a penalty for persistent early engagement in the 35th minute, on the Welsh 5m line, against Scotland.

It was wrong. Had Scotland made something of that opportunity they would have gone in at half-time buzzing and leading on the scoreboard. As it was they entered the changing room frustrated, and down on the scoreboard.

I expect Scotland to play more expansively against the French in Paris. Expectation can weigh heavily on the shoulders and I think home games at Murrayfield, especially after winning two in a row, perhaps brought a conservative mindset.

This game in Paris will allow Scotland to have a go. They will be reasonably happy with two victories thus far and with the shackles off I think we'll see the ball being thrown around some more.

Also, a general observation from this round of Six Nations games: thank you Italy for the second half performance versus England. Had we not had this I think we would've been despairing over the complete void of entertainment over the weekend.

The first round of matches this year was one of the best but since then poor conditions have ruined the tournament as a spectacle.