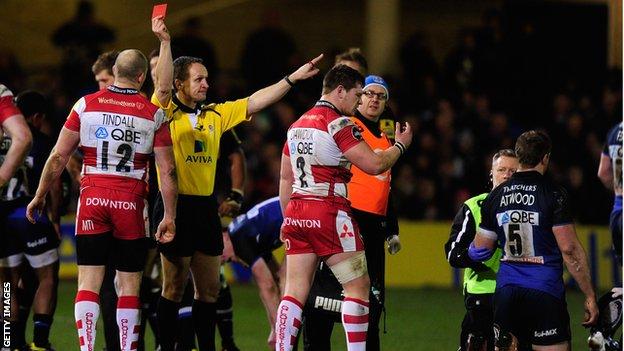 Gloucester hooker Darren Dawidiuk has been banned for six weeks by the Rugby Football Union for the red card he received against Bath.

The 25-year-old hooker was sent off for a tip-tackle on Dave Attwood in the second half of the Cherry and Whites' 31-25 defeat at the Rec on 1 March.

Lock Lua Lokotui was cited for a similar offence in the same game, but was cleared by a disciplinary panel.

Unless Gloucester appeal, Dawidiuk will unavailable until 22 April.

It would mean him missing four Premiership matches and the Amlin Challenge Cup quarter-final against Biarritz.

Panel chairman Judge Jeff Blackett said: "The tackle was deemed to warrant a mid-range sanction entry point of eight weeks which was then increased to reflect the recent IRB [International Rugby Board] memorandum dealing with such cases and subsequently reduced by three weeks to take account of mitigating factors.

"Unless we continue to apply these sanctions to this type of tackle we will not change the behaviour of players and reduce the potential risk of catastrophic injury."

Dawidiuk has made 16 appearances for Gloucester this season, scoring one try.