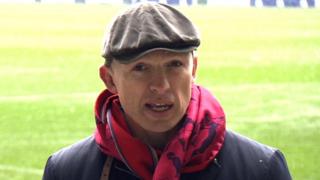 Wales will retain the title if they beat England by eight points, and could even do so with a seven-point win - while England will be looking for their first Grand Slam since 2003.

Also in this week's Dawson Debates, Matt praises Italy's 2013 campaign after another impressive display last weekend - and predicts a tough time for Scotland when they take on France in Paris.

You can send Matt your questions via Twitter using the hashtag #dawsondebates or on the BBC Sport Facebook page.

Listen to Matt Dawson as he takes your calls and reaction during the final round of the Six Nations on BBC Radio 5 live Rugby 606, 19:00 GMT on Saturday 16 March.