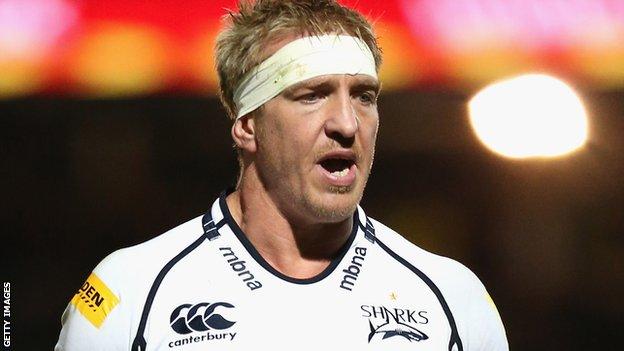 Sale Sharks number eight Andy Powell remains hopeful of extending his deal at the club beyond the current season.

Injuries have limited the 31-year-old to 12 starts this year but he produced a man-of-the-match performance in the LV= Cup semi-final win over Saracens.

"I'm out of contract at the end of this year and I've had no offers anywhere yet so I had to play well," he said.

"In terms of the future, I would love to stay here as I'm happy but it has been a tough season."

Powell moved to Sale on a two-year deal in May 2011 after his release by Wasps following his part in a bar brawl.

The Brecon-born number eight, who has featured 23 times for Wales, has previously spoken about the possibility of moving into rugby league.

Sale have spent the majority of the season at the bottom of the Premiership, but are up to 11th following London Welsh's five point penalty deduction.

And the 2009 British and Irish Lion is hoping this Sunday's final can help them in their final five league games.

"We're a good side at the end of the day, it's just we're our own worst enemy at times," Powell told BBC Radio Manchester.

"For the fans, more than anything, it's great as they've followed us all year when results haven't gone our way.

"It's a simple game at the end of the day, I think we complicate things at times but we've got Quins in the final which is a tough game but we can do it if we really want to.

"We'll just worry about the final and then we'll think about Bath in the Premiership the following week which we know is going to be a huge game."