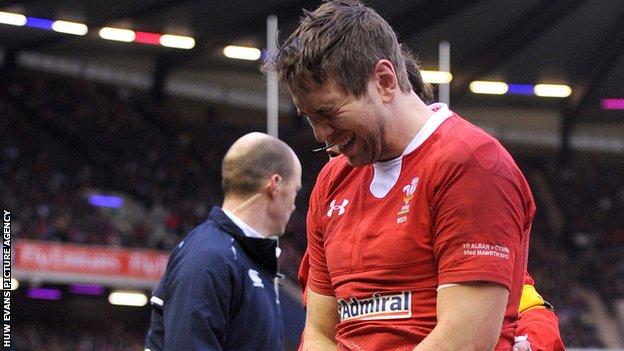 Ryan Jones has revealed he is "desperately disappointed" to miss what he calls 'the fixture of a generation" between Wales and England.

Wales host England in the Six Nations title decider at the Millennium Stadium on Saturday.

The back rower has been out of the clash with a fractured bone in his shoulder.

"It's a fixture of a generation," said Jones, who captained Wales in the wins over France, Italy and Scotland.

"It has all the make-up of being a 'where were you?' moment.

It will be a tense edgy affair because both teams have everything to play for and there is an awful lot at stake. Whether that is silverware, through to bragging rights and Lions tour selection - there is no bigger fixture around than this

"I am desperately disappointed not to be involved, but that is sport and I will be there in the stands, cheering our team on to a wonderful and memorable victory.

"It will be a tense, edgy affair because both teams have everything to play for and there is an awful lot at stake.

"Whether that is silverware, through to bragging rights and Lions tour selection - there is no bigger fixture around than this.

"The guys are aware of it, but it's about doing your job and it is going to be close and tight. There won't be a lot in it, but hopefully more than eight points."

Jones was ruled out of the game on Tuesday after a scan revealed he had fractured a bone in his shoulder on the 48th minute of Wales' 28-18 win over Scotland.

Justin Tipuric, Andrew Coombs and Aaron Shingler are options to start in the back-row against England.

As players who have been versatile enough to play in the second and back-rows, Newport Gwent Dragon Coombs and Scarlet Shingler are like-for-like options to take over from versatile Jones at blind-side.

Cardiff Blue Warburton could also join Tipuric in a re-formed Wales break-away trio with the former starting at six.

Jones, 32, is expected to be sidelined for between six to eight weeks but he admits he is disappointed to miss the Six Nations finale in Cardiff.

"I am struggling a bit and I am still a bit sore," said Jones.

"I am having further tests and I have a fractured bone in my shoulder and I have to just make sure that is it.

Jones, who took over the captaincy from the injured Warburton after the opening 30-22 defeat to Ireland in Cardiff, believes Wales have not been given the plaudits they deserve for turning their Six Nations campaign around with three wins away from home.

"I don't think people have given us credit for what we have done," said Jones.

"We have won ugly, with some pretty professional performances, and the pack has been nothing short of superb in some pretty shocking conditions.

"I don't think this weekend will be any different. You have two very disciplined defences, two teams with very efficient and proficient packs and it its going to come down to a moment.

"It's going to be a defensive error, a referee's decision and maybe a moment of brilliance from someone."