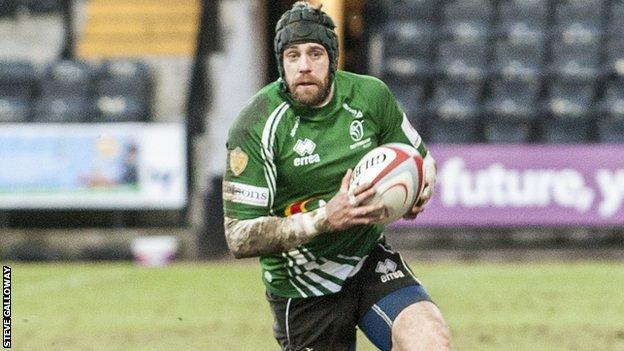 Long-serving back David Jackson has agreed a new two-year contract with Championship side Nottingham.

The 30-year-old made his first-team debut in March 2001 and is the club's all-time league record appearance maker, having played 279 games.

Jackson, whose last deal was due to expire at the end of the season, said: "I'm thrilled. This means I can focus all my attention on the field.

"It is an exciting time at Meadow Lane right now."

The statistics that come with being a one-club man are nice and make for interesting reading, but I get my satisfaction by being part of the team

The Green & Whites are second in the table and look almost certain to end the season in the top four and qualify for the play-offs.

With five games left to play, they are 11 points clear of fifth-placed Bristol, who they beat last week.

Jackson, whose association with Nottingham began as a six-year-old, added: "It was an easy decision for me - I've been part of the Green & Whites first team for 13 seasons now and love representing the jersey.

"My passion for Nottingham has never changed. All I want to do is help this club progress, that is where I get all my enjoyment.

"The statistics that come with being a one-club man are nice and make for interesting reading, but I get my satisfaction by being part of the team.

"There is still a lot to look forward to this season and what might happen after that."

Head coach Martin Haag said: "He is a stalwart of the club.

"After all these years he continues to produce the highest standards, is as fit as ever and his character and ethos represent what we are trying to achieve here at Nottingham."