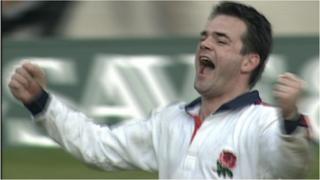 As England aim to win their 13th Grand Slam on Saturday, BBC Sport looks back at their six post-War clean sweeps in the Five and Six Nations.

Eric Evans skippered England to glory in 1957, but it was 23 years before Bill Beaumont repeated the feat with his side.

The 1990s were a particularly fruitful era with Will Carling captaining his country to three slams in five years, before Martin Johnson's men added another in 2003.

They can add another if they beat Wales in Cardiff, a venue where they have won just once in their last five visits.