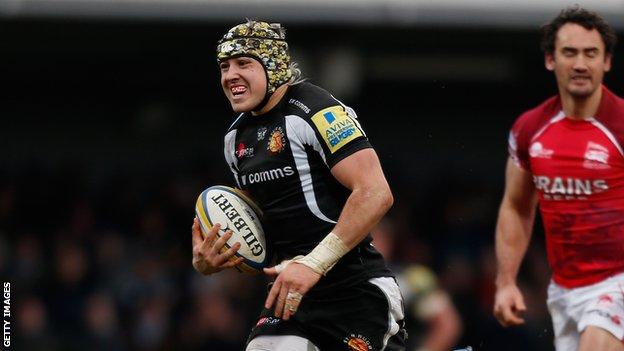 The 19-year-old, who was the youngest nominee for the award, beat nine other players including Bath's Tom Heathcote and Marland Yarde from London Irish.

"It's amazing, it's a great honour to win an award like this," Nowell told BBC Radio Devon.

"A lot of great players were in the competition as well, so to win it is a big honour."

The Cornish-born full-back and winger, who is currently with the England Under 20s squad ahead of their final Six Nations clash with Wales, made his

But it was in this year's event where he really shone, scoring three tries in four matches, including two in the win over London Welsh in November.

It led Nowell to and he scored his also against London Welsh.

"If it wasn't for the LV= Cup I think many of us young players wouldn't get the chance to play," Nowell said.

He has played the full 80 minutes in Exeter's last four Premiership games, which included a loss at leaders Saracens and a win at second-placed Harlequins, keeping out Argentine international Gozalo Camacho and Fijian wide man Watisoni Votu.

"I'd like to get as far as I can with my career," added Nowell.

"One of my goals this year was to break through and play a couple of games for Exeter in the Premiership.

"We've got a handful of games left in the Premiership, so I'd like to play for the rest of the season."