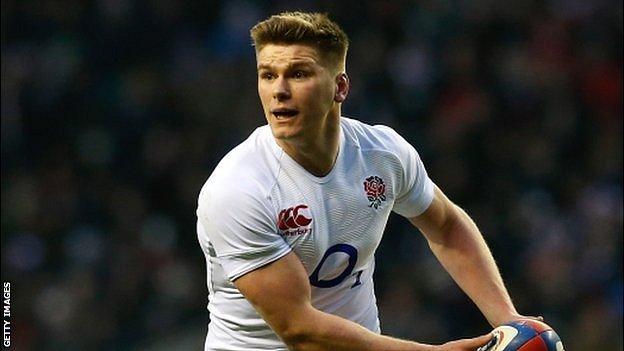 Leicester scrum-half Youngs, 23, is in for Danny Care while fly-half Farrell, who missed the win over Italy with a thigh injury, replaces Toby Flood.

Flanker Croft, who has made only six appearances since returning from a broken neck, replaces James Haskell.

Meanwhile, second row Joe Launchbury retains his place in the starting line-up after shaking off an elbow injury.

For Wales, prop Gethin Jenkins will captain the side instead of Sam Warburton for the clash at Cardiff's Millennium Stadium.

"He is clearly a quality player and he has had a great impact since he has come back into the team. James Haskell's impact coming off the bench will serve us better.

"Both props will have a big contribution. Joe will give us the solidity in the scrum and then as the game wears on Mako will come on and do his thing."

Wasps lock Launchbury, 21, was given until Thursday morning to prove his fitness after hyper-extending his elbow against the Azzurri, meaning Courtney Lawes was on standby.

But perhaps Lancaster's biggest decision for the most important team announcement of his tenure was in the back row.

Croft's last start for England was 12 months ago against Ireland. In April 2012 he suffered a triple break to a vertebra and a burst disc when tackling Harlequins number eight Nick Easter.

The Leicester flanker was told later that he had come as close to being paralysed as it was possible to be but made his comeback for the Tigers on 4 January.

After being given medical clearance to play every week, Croft, 27, was immediately recalled by England and he came off the bench against Italy.

He will bring a more mobile, athletic dimension to the England back row than the more physical Haskell, who is primed to win his 50th cap off the bench.

Victory for England would give them their first Grand Slam since 2003, the year they also won the World Cup.

But Lancaster's team could still win their second Championship in three years if they are beaten by fewer than eight points.

Defending champions Wales would also take the title with a seven-point win as long as England did not score three more tries than them.