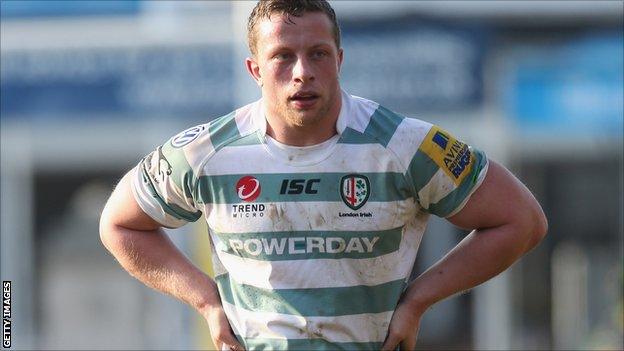 London Irish director of rugby Brian Smith says he is doing everything he can to keep prop Max Lahiff at the Premiership club.

Lahiff, 23, has been linked with a move to Australia having impressed with his performance in the front row.

He joined the Exiles in 2009 and has gone on to make 62 appearances in the Premiership, Heineken Cup and LV=Cup.

"We've put our best foot forward and we are very hopeful of keeping him here," Smith told BBC Radio Berkshire.

He has stepped up to the plate at loose head and played almost every minute of every game. So Max has done a wonderful job for us this season

His departure would be a further blow for Irish with England international Alex Corbisiero moving to Northampton Saints at the end of the season.

Smith stressed that they're still working on extending Lahiff's contract at London Irish, but can see why the Aussies would be keen to have him.

"Max is a terrific young player and he has been outstanding for us this season," added Smith.

"He has stepped up to the plate at loose head and played almost every minute of every game.

"He has shouldered all of the responsibility there and we've obviously had injuries in that position. So Max has done a wonderful job for us this season.

"Very early in the piece I got in his ear and tried to extend his contract.

"His father is Australian, he has strong links and family ties down under. So he is working out where he wants to have his playing future.

"He is a very dynamic player so would be suited to the Super 15 game.

"There are very few props in Australia, certainly not the same strength in depth we have here in England, and I know for a fact they provinces are chasing him.

"But in saying that we have been very pro-active in signing a couple of props and particularly in the front row we will be stronger that ever next season."