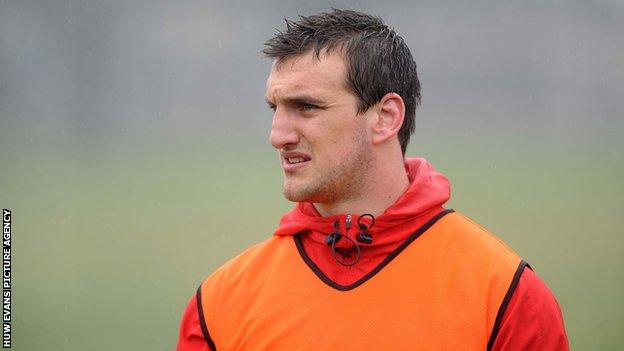 Interim Wales coach Rob Howley says he selected Gethin Jenkins as captain to allow Sam Warburton to concentrate on his own game.

Warburton, man of the match in Wales' 28-18 victory over Scotland, has also been switched to blind-side flanker for Saturday's Millennium Stadium clash.

"I felt Sam needed to concentrate on his game," said Howley.

"Gethin is vastly experienced, captained Wales against Australia in the World Cup play-off and has been captain many, many times when Sam or Ryan has gone off.

"We are comfortable with it. We have spoken about leadership over the last couple of weeks and it is not just about the captain, but about the unity within the squad.

"We are lucky that we have that number of leaders who can step up and Gethin has that responsibility for this weekend."

Warburton lost the captaincy when he missed Wales' victory in Paris because of a neck injury and was replaced by Jones, who led Wales to three successive victories away from home against France, Italy and Scotland.

Jones kept the captaincy when Warburton was drafted back into the side for the victory over the Scots last Saturday.

Warburton, along with lock Alun Wyn Jones, were the other candidates for the captaincy role for the visit of Grand Slam-chasing England.

But Howley has opted to give the role to Jenkins, who will captain his country for the fifth time, and not Warburton who was Wales' Grand Slam skipper in 2012.

Howley has revealed he has explained his decision to Warburton not to return the captaincy to him.

"It was a conversation we both had, but I have gauged Sam over the last three or four weeks," said Howley.

"He has been outstanding when he hasn't been involved and as I have said over the last three weeks it's about the team.

"It's about the best for the Welsh team playing against England on Saturday, and that means Gethin Jenkins is captain."

While Warburton has been overlooked for the Wales captaincy, he has also been switched from his favoured open-side flanker role to blind-side to accommodate Justin Tipuric in a new-look back row.

"We have been pretty consistent saying we would like to see Justin and Sam play together," said Howley

"It is injury-enforced, having your two first-choice number sixes being out in Ryan and Dan Lydiate, but I was really pleased how they [Warburton and Tipuric] worked together last week.

"They put pressure on the ball and they are very smart and intelligent rugby players.

"I think pressure on the ball is going to be pretty important on Saturday.

"We have two world class number sevens, two fetchers and two players who can be smart in the contact area."