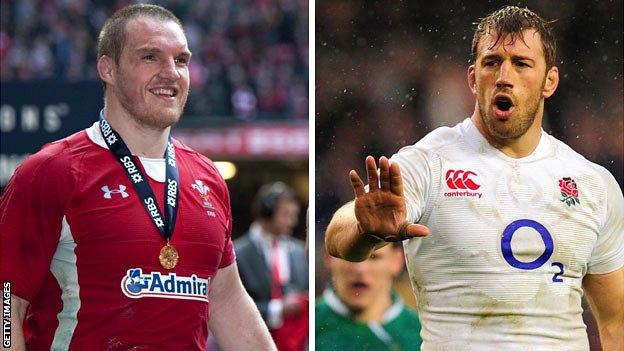 It could not have been set up better - Wales v England in Cardiff to decide the 2013 Six Nations title.

England travel to the Millennium Stadium aiming for a first Grand Slam in a decade, Wales are looking to retain the title they won last year.

The hosts need to win by seven points, provided they restrict England to only one more try than them, to keep hold of the title for another year.

Here they cast their expert eyes over their respective former teams ahead of one of the most eagerly awaited games between the two since Scott Gibbs broke English hearts in 1999.

JD: The Wales back three is a very good unit and full-back Leigh Halfpenny is maybe the stand-out player of this Six Nations, he's unbelievable.

He does everything well, not least his excellent goal-kicking, although if I had a criticism it's that I'd like to see him hit the channel outside the outside centre more - I know he has the ability to do it.

Both George North and Alex Cuthbert (who is the joint top try-scorer with two) are big, strong, quick wingers, although there may be a few doubts at the moment about the latter under the high ball and in defence - he's still learning though.

I know interim coach Rob Howley would like them to come in and do more work near the rucks, so they can use their speed against forwards.

JG: England's back three hasn't set the Six Nations alight with scintillating running and try-scoring - the Wales trio have out-scored them four tries to one - but they have actually run more metres with the ball than their Welsh counterparts, notching up 587m to 522m.

Chris Aston is a superb support runner but needs England attacking well to make an impact. He has been criticised for his tackling - he has the joint-most missed tackles (eight) in the tournament - so far and only has a 65% tackle success rate. He faces a big challenge in the dangerous North.

Mike Brown is a full-back playing out of position but he's been very consistent - he's a good all-rounder and beats defenders despite not being the quickest.

Saracens full-back Alex Goode has done his job, taking kicks and returning with interest. It would be nice to see him hit the line but that's wishful thinking as he does not have blistering pace.

Jerry's view: Overall I feel the Wales back three is stronger.

JD: All four centres are massive, but Wales outside centre Jonathan Davies is the best footballer of the four and has a good all-round game. He has completed 94% of his tackles this Championship, the best of the four on show on Saturday.

Jamie Roberts is a major carrier for Wales but he has not been at his best and needs a big game. He should look at how All Black 12 Ma'a Nonu developed his game and try to do the same, especially by off-loading more.

JG: Manu Tuilagi is very powerful and dynamic. The 17st 9lb outside centre is England's X-Factor and has beaten more defenders in this tournament than the other centres combined.

Brad Barritt tackles anything that moves and also carries to the line well. Between them England's centres have both carried significantly more often and made more metres than the Wales centres.

Jerry's view: From the games I've watched, the England pairing is stronger.

JD: Wales scrum-half Mike Phillips had a big game last week, he carried really well. He gets criticised for the lack of speed in his passing but you know he'll be a handful for the opposition.

His partner, Dan Biggar, has found his feet in the last couple of games. He bosses the game very well, he's a good goal-kicker and he's very vocal - neither he nor England counterpart Owen Farrell are great runners though.

JG: Farrell does not run much and Biggar has run almost three times more often this year, but the Wales fly-half also kicks out of hand much more and has actually kicked away more possession, under orders no doubt, than any other player this campaign.

Farrell is the Ice Man and a fine goalkicker. Not a lot seems to faze him. Yes, he's got an edge to him, but as long as it's kept under control that's OK.

His partner, Leicester scrum-half Ben Youngs, has a tendency to send his his box kicks too far and with George North and Alex Cuthbert lying in wait he has to be careful of that at the Millennium Stadium.

Jerry's view: This is too close to call, it's a draw for me.

JD: New captain Gethin Jenkins did really well against Italy in the scrum but Paul James is unlucky to miss out because he has played exceptionally well.

Jenkins has greater versatility though: the loose-head is solid in the scrum, his work in the loose is unrivalled for a prop and he wins turnovers like a back row.

Wales tight-head Adam Jones has been in much better form this year. He's been making lots of tackles but his real importance is in the scrum - he's the rock that this Wales team is built on.

Hooker Richard Hibbard has flown under the radar but he's played exceptionally. He carries well and is a good scrummager, and although his line-out throwing can be a bit iffy on occasion, he's really come to the fore this season.

JG: For England it really is a case of youth against experience, as Jenkins and Jones have 184 Wales caps between them and both won three Grand Slams.

Dan Cole has been very good in the loose and wins lots of turnovers but with Halfpenny kicking for Wales, the prop must not continue to concede penalties - he's the joint worst in the tournament with eight.

It must have been close with Dylan Hartley at hooker for England but Tom Youngs has got the nod. The Leicester man has improved his line-out throwing - he hit 92% against Italy - and carries hard in the loose,as well as making his tackles.

It must have been a close call at loose-head as well but Joe Marler has been picked ahead of Mako Vunipola, who seems to be better as an impact player. On Saturday, Marler and Cole face their toughest assignment yet.

Jerry's verdict: Wales have the edge in the front row.

JD: Wales second row Alun Wyn Jones is world class - his attitude is amazing and he really understands the game.

Ian Evans has done an exceptional job as Wales have had so many injuries to second rows - he's the one who has kept the line-out going.

JG: Geoff Parling and Joe Launchbury have almost a father and son relationship in the England second row.

Parling is England's line-out caller and calls a lot to himself, so recalled blind-side Tom Croft will be a good extra option for England.

Launchbury, the newbie, is a very talented kid at 21 and with his fine all-round game will be a future Lion. I don't believe he will be fazed by the Grand Slam game.

Jerry's view: Wales have the edge here based on experience.

JD: It will be interesting to see how Justin Tipuric and Sam Warburton perform for Wales - will they play left and right, or open-side and blind-side?

Warburton's strengths are that he's very good at the breakdown, he's very powerful and quick, and is a good decision maker - knowing when to attack the ruck and when not to is crucial.

Tipuric is more of a footballer and the pair will gel nicely with number eight Toby Faletau, who has been an amazing ball-carrier for Wales this year. He's got a great work rate and is a very good footballer who also reads the game well.

JG: There will be two very different sets of back rows on show and without punishing ball carrier Ben Morgan at eight, the English trio will be less of a threat with ball in hand.

Tom Wood, normally a flanker, is a good player and has done a decent job at number eight but he lacks the power of Morgan.

Both Wood and Chris Robshaw have a very high work rate and they do the job very well without doing anything spectacular.

Croft, back after a serious neck injury, certainly can be spectacular with his pace, as shown by his sizzling score against France last year, and he will also be a real option at the tail of the line-out.

JD: For me Robshaw has been exceptional this year but is he a six and a half? It will be a big test for him when he plays two out-and-out sevens on Saturday.

JG: Warburton v Robshaw is what we are all waiting to watch. Robshaw will carry and pass more but Warburton will win more important ball.