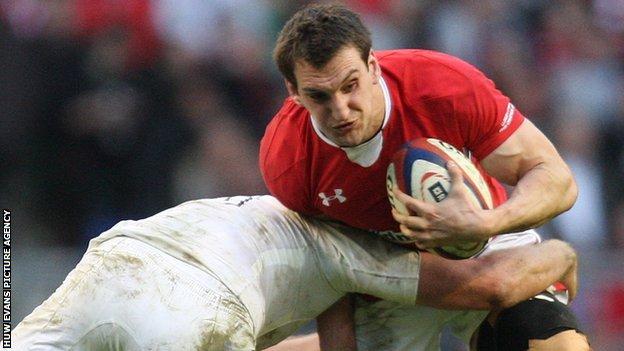 Sam Warburton has revealed he was part of the decision-making process not to make him Wales captain for the Six Nations title decider against England.

Prop Gethin Jenkins will skipper the side, taking over from flanker Ryan Jones, who was injured in Scotland.

"I had a chat with Howlers [Rob Howley] and we both agreed there was no need to change anything," said Warburton.

"I can go out and just focus on myself and try and perform the same way as I did last Saturday."

Warburton, 24, was captain for the opening 30-22 Six Nations defeat to Ireland before being injured for the France game.

Osprey Jones took over as skipper for the wins against France, Italy and Scotland, but broke a shoulder during last weekend's win at Murrayfield.

In the absence of leadership duties, Warburton regained form to be named man-of-the-match against the Scots.

And he and Howley came to the conclusion that leaving the Cardiff Blues open-side to concentrate on his Wales role at blind-side would be the best option.

Warburton added: "It was a conversation between me and Rob and we just figured out what would be best for me going out on to the pitch.

"We both agreed that last week went pretty well and we didn't see the need to change things."

Warburton is now looking forward to continuing the flank partnership with Tipuric that successfully unfolded following Jones' departure at Murrayfield.

"I think going into this weekend we will really look forward to that as two out-and-out sevens whereas the England back row is a bit more bulky, so hopefully we can go at them quite hard at the breakdown," said 37-times capped Warburton.

"It is going to be an absolutely massive game and there's not going to be many points between the teams.

"I've been really excited ever since the team announcement and all the players are chuffed knowing it's going to be one of the biggest games they have played in.

"It's going to have to be a combination of playing expansive and tight. I don't think one game plan will just beat England.

"The focus isn't really to ruin the Grand Slam. It's to make sure we win and we desperately want to win and then if we are in a winning position with 10 minutes to go, then maybe you can look towards what points difference you are at.

"I did enjoy last weekend, just being able to go out and play [although] the captaincy is a massive honour and you feel very privileged when you are asked to be captain."