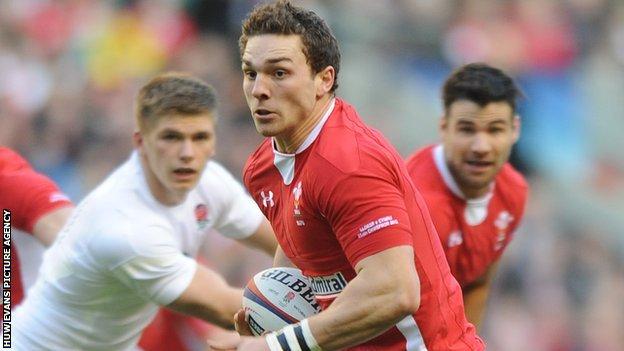 Scarlets winger North, 20, said: "You try to keep a cool head and you try to maintain calm and focus.

"But everyone you see on the street is saying 'make sure you smash their heads in!'"

North had told journalists on Thursday the rivalry between the neighbouring nations meant Wales fans wanted victory amid "a bloodbath".

The Welsh-speaking, Anglesey-bred player, who was born in the English town of King's Lynn to a Welsh mother and English father, said: "The whole country [Wales] loves it.

"Wales is a massive rugby nation, and whenever we play England there seems to be this long, long rivalry that everyone just wants a bloodbath, really.

"They just want the best for the team, and their way of helping is just making sure they give you a tap on the back when you are walking round town or saying 'good luck'.

"But they are a great team, and have great qualities.

"It's not like a bad thing that they [Welsh fans] hate them [English] because they are nasty people.

"It's that they are a good team to beat and a good scalp to have."

England will arrive in Cardiff with their sights on European rugby's top trophy and a first Slam since 2003.

However, after away wins over France - in which North scored a crucial try - Italy and Scotland, the mathematical permutations mean Wales can retain the title.

North added: "You can't beat around the fact that it is a big game.

"But you've got to try and take it as your job at the end of the day, so it's just trying to focus now, ready for Saturday.

"If you cut all the emotions out of it, it's just another game.

"You've just got to make sure your head is in the right place. You have got to pull yourself back from the occasion and try to relax.

"We had the heartbreak of the first game [Ireland beat Wales 30-22 in Cardiff] and did not perform very well.

"Then to have had such a hard journey with three away games on the bounce, and then come back home and come back with a great chance to retain the title, it's a great place to be for the whole squad."

McBryde responded on Friday, saying "The week has dragged on and everyone's expectations are high against the old enemy.

"It's going to be a special occasion and we must keep our feet on the ground and not let the occasion be too much for us.

"We need to concentrate on what we need to do.

"With the experience we've got I hope we can deal with the pressure better than England tomorrow."