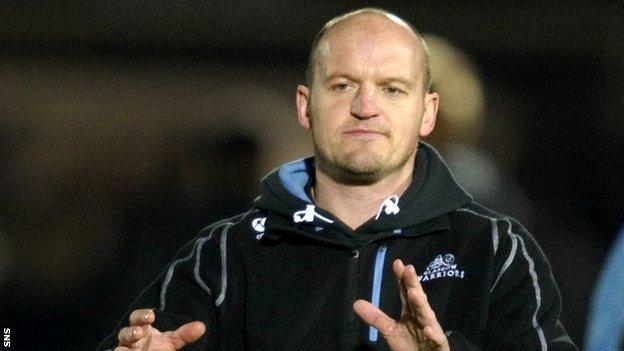 Former Scotland stand-off Gregor Townsend believes Scotland have a great chance to claim their first win in France since 1999.

The Scots face an underperforming France in Paris on Saturday in their final Six Nations match.

Townsend insists Scotland are facing the French at the right time, with the hosts at risk of the wooden spoon.

"I do believe France are a vulnerable side, it could be a great time to strike." he told BBC Scotland.

If Scotland can upset the French rhythm, put points on the board, it could be a great time to strike

The French sit bottom of the table, having lost three and drawn one of their Six Nations matches.

"Having had those defeats, there's bound to be some disagreements in the group," said Townsend.

"And the crowd can turn on their team pretty quickly in France."

Townsend, who won 82 caps for Scotland, believes a good start by Scott Johnson's side is imperative.

"If Scotland can upset the French rhythm, put points on the board, it could be a great time to strike.

"But other countries have won there over the last few years and Scotland have a very good opportunity."

The Glasgow Warriors head coach has been pleased by Scotland's Six Nations campaign, but is not getting carried away.

"It's been decent so far," he said. "If we get a win then it'll be an excellent tournament.

"The last two games maybe haven't been as fluid performances as we'd hoped, because Italy was really good.

"Already we've secured more wins than we have in the last three or four years, but we want to keep that momentum going."

And Townsend believes improved performances would have done interim head coach Scott Johnson's chances of being awarded the job on a permanent basis no harm.

"I think it's a strong coaching team that Scotland have, and you can see the players are positive about what the coaches are trying to do," he said.