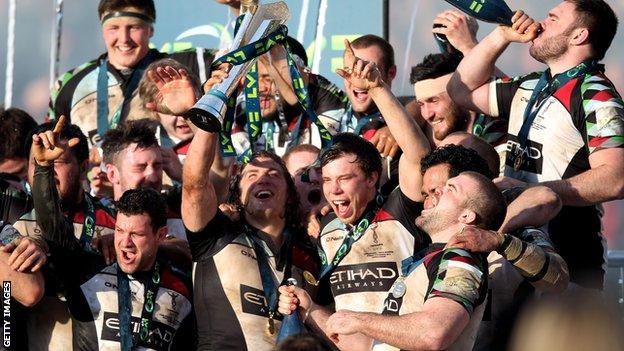 Harlequins kept their hopes of a historic treble alive with a resounding win over Sale in the LV= Cup final.

Tom Williams and Tom Guest both scored tries in the opening period to hand Quins a 18-6 half-time advantage.

Tom Casson touched down within five minutes of the restart to give the Sharks a mountain to climb.

And, although Johnny Leota went over to give Sale hope after Luke Wallace's try, Harlequins held on to record a comfortable victory at Sixways.

Historic treble on the cards?

No side have ever won the Heineken Cup, Anglo-Welsh Cup (LV= Cup) and the Premiership in the same campaign.

The defending Premiership champions, who are currently second in the league table and face Munster in the last eight of the Heineken Cup, were aiming to win a sixth final in a row, while Sale were hoping to upset the odds and end a run of six successive defeats in meetings between the clubs.

Ben Botica - the competition's most accurate kicker coming into the final with an imperious record of 24 from 26 - gave Harlequins an early lead with a penalty from long range.

And having hit the front early in their 31-23 semi-final victory against Bath last week, Quins made a similarly impressive start in Worcester, with Williams going over for the first try of the match to extend the advantage.

Sam Smith showed quick hands to release fellow wing Williams, who had the relatively simple task of going over in the corner. Botica unusually failed to add the conversion.

Danny Cipriani kicked a routine penalty to get the Premiership strugglers off the mark, but the respite was brief and Harlequins again came back strongly to justify their favourites' tag ahead of the final.

Following a five-yard scrum, Guest was alert to pick up and muscle his way through to touch down, with Botica this time successfully converting.

After Cipriani and Botica exchanged further penalties, Quins headed into the break with a deserved 18-6 lead.

Sale needed to get off to a good start in the second period and although Cipriani added another penalty in the opening throws, Harlequins soon went over for a third try.

After a well executed line-out Quins worked the ball to Casson, and the centre threw Andy Powell a clever dummy before strolling through to touch down. Botica confidently added the extra two points.

They were denied a further try as Mark Lambert bundled his way over but Sale's defence prevented the ball from being grounded.

But by now Harlequins were rampant and the Sharks were unable to prevent Wallace grabbing a further try following another scrum on the five-metre line. Botica again converted to extend the advantage to 23 points.

Sam Tuitupou combined well with Leota to score Sale's first try of the match, with Cipriani, also involved in the build-up, adding the conversion to keep the final alive.

But Quins, whose squad consisted of 16 players under the age of 23, held on to win the Anglo-Welsh for the first time since 1988 and successfully complete stage one of their quest to earn an LV= Cup, Premiership and Heineken Cup treble.

Harlequins have also now won each of the last six finals they have been involved in, since their 30-27 defeat by Newcastle in the Anglo-Welsh Cup in 2001.

"I'm just over the moon for the group. It is a long way into the season and we face a massive next nine weeks but, for those players, that is something that is a reminder to everyone coming back in the next couple of weeks.

"For the club, not only is it a major trophy - when you look at four guys in the tight five who are 21 and under, that is something for them to store away in their locker for years to come and they are the cornerstone of what this club will be about for a decade or more.

"They have won a national trophy and we said before the game not to take anything for granted because you never know when you will get there. We have been very fortunate to be in a number of finals in the last few years and to have come away with a trophy.

"There is a good vibe in the dressing room and a lot of very proud parents of young men."