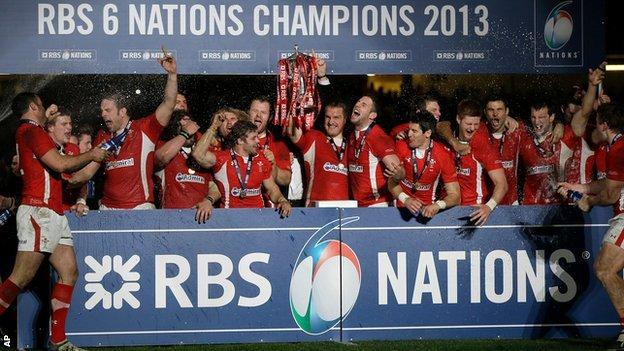 Interim Wales coach Rob Howley says his side's Six Nations title in 2013 is a better achievement than their clean sweep in 2012.

Wales recorded a record 30-3 win over England to deny them the Grand Slam at the Millennium Stadium.

"This is better than the Grand Slam last year. We were outstanding," said Howley.

"We talked about our discipline and attitude.

"To do what we have done after that first 30 minutes against Ireland is a great turnaround.

"They have shown great fortitude and they outclassed England."

Full-back Leigh Halfpenny kicked 12 points, with fly-half Dan Biggar slotting over eight points to secure a resounding win over an England side looking for their first Grand Slam since 2003.

England would have won the title had they lost the game by six points but were overrun by their hosts in front of a sell-out Millennium Stadium crowd.

"England had a good Six Nations but when it really came to it, man-for-man, they were not as good as Wales...the bubble has been burst."

"It was when 70,000 cavorting Wales fans started chanting, "Easy! Easy!" that you finally flushed all pre-match predictions down the gurgler and reached instead for the record books."

It was Wales' 26th Championship title in the tournament, equalling England's haul.

Wales staged a dramatic comeback after their opening 30-22 loss to Ireland in the Six Nations opener - at the time an eighth defeat in a row.

Howley claimed he was confident Wales would bounce back from that defeat and reiterated his belief that the 2012 Grand Slam champions had not become a bad team despite their run of defeats.

Wales had lost their summer Test series 3-0 to Australia down under and suffered a clean sweep in their autumn Test series, with defeats by Argentina, Samoa, New Zealand and Australia.

"We were consistent with that message and the players have gone out and delivered.

"The Millennium Stadium is a unique place in world rugby and we felt with our experience, with the crowd behind us, we needed to start well.

"The first 20 minutes was the foundation."

Howley paid tribute to England after the full-time whistle and revealed Wales had designed a high-tempo game-plan to test England's fitness after they only had six days to prepare for the title-decider in Cardiff.

England beat Italy 18-11 at Twickenham last Sunday, a day after Wales had beaten Scotland at Murrayfield.

"They had a six-day turnaround, which is tough. We wanted to take advantage of that and we certainly did," said Howley.

433 comments
Back to top
unknown