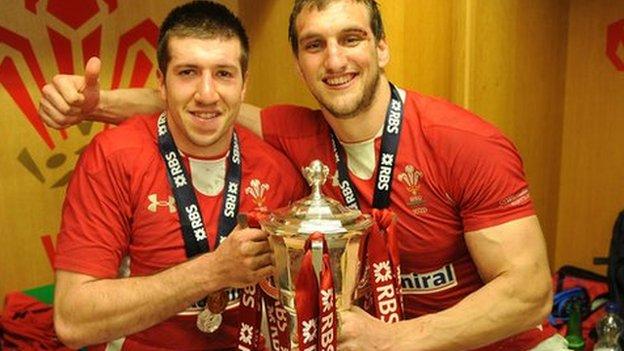 Man of the match Justin Tipuric says Wales' record win over England to win the Six Nations title in Cardiff was "a dream".

Wales beat England 30-3 in a record victory in Cardiff to win their fourth Six Nations title in nine years at the Millennium Stadium.

The open-side flanker had a hand in Wales' second try by wing Alex Cuthbert to deny England a Grand Slam.

Wing Cuthbert grabbed two second-half tries for Wales to record his nation's fourth straight victory in this season's tournament after their 30-22 defeat by Ireland in their Six Nations opener.

Wales only had to win by eight points to win the title but they put England to the sword in emphatic fashion with a 27-point margin over a side looking for their first Grand Slam since 2003. In the process they retained their Six Nations title despite not winning the Grand Slam.

England would have won the title if they had kept their margin of defeat to six points but they had no answer to Wales' pace and power.

Osprey Tipuric wore the number seven jersey for the first time to start alongside 2012 Grand Slam-winning captain Sam Warburton, who switched to the blindside flanker role, against the English.

It proved to be a masterstroke by interim head coach Rob Howley when his dynamic duo combined in blistering fashion for Cuthbert's second try which finally broke English hearts in the Welsh capital.

"The boys were outstanding and everyone worked so hard for each other," said Tipuric.

"We were ready to play Tuesday and to turn up Saturday and deliver such a great performance - we are chuffed to bits.

"We had a lot of bad media but it gave us a kick up the backside and we stayed tight and we just worked so hard in training."

Cuthbert's two tries sealed a famous victory for the Welsh and the Cardiff Blues wing took his international try tally to nine.

The 22-year-old, who scored the try to clinch the Grand Slam against France in 2012 at the same venue, saysWales were determined to keep hold of the Six Nations title which they won last year.

"We had a bit of a blip at the start (of the Six Nations), but we have worked so hard the last few weeks and we didn't want to let go of that trophy easily," said Cuthbert.

"We wanted it back and we are so happy we have got it back."