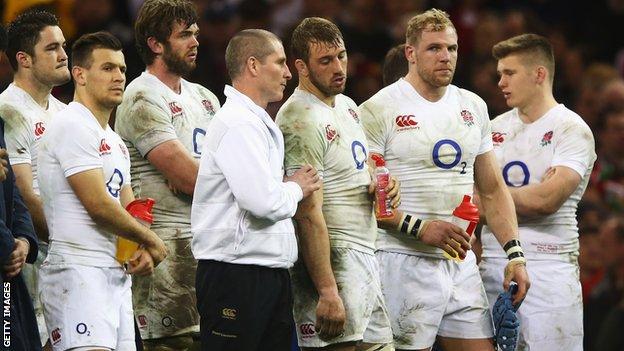 England head coach Stuart Lancaster admitted his side "did not turn up" as their Grand Slam hopes were crushed by Wales at the Millennium Stadium.

Wales stormed to the Six Nations title after securing a record 30-3 victory over their bewildered opponents.

Lancaster struggled to explain why England caved in in the second half.

"I don't think it was a psychological thing," he said. "Wales played well, we didn't turn up and didn't match their physicality. It was better than ours."

England trailed 9-3 at the interval but were overwhelmed on the resumption as the capacity home crowd celebrated wildly.

"Going into half-time, we realise we hadn't got all the execution right - and set-pieces were a problem," added Lancaster.

"We still felt we were going OK, but the first quarter of the second half wasn't good enough and Wales thoroughly deserved the win, no complaints."

"It is hard to take," he said. "But after 65 minutes the game was over. It is perhaps a good experience for our guys to stand there and see what it is like to (see a team) lift the Six Nations trophy.

"Momentum is a great thing and we couldn't get any at all, especially in the first half.

"All credit to Wales. I thought they were strong in every single department. We can only learn from that."

Farrell, who is part of Warren Gatland's British and Irish Lions coaching team, said several Wales players had put themselves into contention for selection for this summer's tour of Australia.

"Obviously we don't just look at one game and there are still a lot of big games coming up," he added.

"But you do want to see who can turn up in the big games and a lot of the Welsh boys with big-game experience certainly turned up."