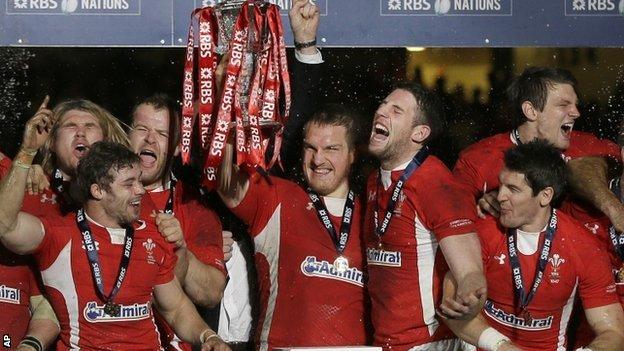 It was when 70,000 cavorting Wales fans started chanting, "Easy! Easy!" that you finally flushed all pre-match predictions down the gurgler and reached instead for the record books.

did not just pillage the Six Nations crown from them. It chased the men in white back across the Severn with Grand Slam hopes up in smoke and tails burning between their legs.

This was supposed to be a nail-biter, a well-balanced bout decided on points. That it was instead a knock-out - a one-sided pummelling that a referee enjoying himself less than Steve Walsh might have stopped in sympathy - will keep Welsh folk tickled for years to come.

"This is better than the Grand Slam last year. We were outstanding."

"England had a good Six Nations but when it really came to it, man-for-man, they were not as good as Wales...the bubble has been burst."

Three of the last four matches between these sides had been settled by a margin of seven points or less. Not this one. Never before have Wales beaten England by such a margin in 132 years.

With this win Wales drew level in the overall standings in this fixture with 56 wins apiece. It was the only parity to be found all evening.

Across the floodlit Millennium turf, pretty much from first minute to last, the red-shirted hordes were in relentless ascendency.

They had three-quarters of the territory, 63% of possession and crashed through 19 tackles.

The back row of Sam Warburton, Justin Tipuric and Toby Faletau led the way, out-performing their opposite numbers at the breakdown and making muscular strides with ball tucked under arm, but throughout the team there was a strength in advance and defence that England could only sporadically match.

Mike Phillips and Jamie Roberts had their best games in a year. Leigh Halfpenny was a magnet when the ball went high and a burrowing mole when it came down. Double try-scorer Alex Cuthbert showed his Sevens speed in thought and deed as he accelerated into the corner twice in 11 second-half minutes.

England's big-hitters, by contrast, swung and missed. Owen Farrell was off form with his place kicking and caught too often in the melee rather than controlling it. The scrum struggled again, the balance in the back row seemed off and the defence - not exclusively Chris Ashton - slipped off when they needed to cling on.

England began this match with 357 fewer caps in their XV than their opponents. Ten of the team were playing at the Millennium Stadium for the very first time. Wales? 12 of their starters had sealed the Grand Slam here a year ago.

It showed. One side coped with the glorious madness of such a booze-soaked, noise-drenched, hyped-up occasion, and the other did not.

Referee Walsh was never likely to be chaired around the streets of Twickenham even before awarding the hosts 12 penalties to the visitors' seven, but his role was an easy excuse that few England players would offer.

Refereeing the scrum in today's game is a thankless exercise in guesswork and supposition. If Walsh's interpretation was that the more experienced front row was on top, it was no larceny. 27-point differences are routs not robberies.

For Wales, in an atmosphere as wonderfully fierce and fervent as anything sport can offer, it was the perfect reversal of fortune: from 3-30 down in their opening match to a 30-3 triumph in their last.

When sore heads clear they may look back on that first 43 minutes of the championship against Ireland and wonder if, in those early panicked moments, a second Grand Slam in two seasons didn't slip away.

Equally, few should search for what ifs after a performance that delivered so authoritatively as this one.

Having been sliding down a run of eight consecutive defeats last month they have now won four on the bounce, improving every time; a defence that shipped three tries to Samoa last autumn now hasn't conceded a try in 360 minutes of Six Nations rugby.

"We were outstanding today," said "We outclassed England. This is better than the Grand Slam last year."

England had lost four of their last five games in Cardiff. On that rationale the result, if not the scoreline, was no historical surprise.

What will leave both team and supporters chastened was the gap in class between the two sides. Just as in 2011, the last time a Grand Slam was on offer going into the final game, they began the championship brilliantly and dropped away in every subsequent performance.

The title secured in defeat in Dublin two years ago turned out to be a high point for that team. This similarly humbling reverse should not be the same for this one.

England have lost only twice in 10 Six Nations matches under Lancaster. This is the first away from home. They have a young team who will surely improve once the scars from this mauling heal.

The coach will be concerned with the cutting edge. England have created just one try in their last four matches, and that a fortuitous one. He will also want to see signs that Saturday's inability to produce under intense pressure is a youthful aberration rather than deep-rooted characteristic.

Lancaster is an honest man. Magnanimous in defeat, and demand more.

England have won one Grand Slam in 18 years and secured one championship in 10. Wales had three Slams in eight years and can now celebrate four championships in nine.

It is a disparity to make a mockery of the gulf in financial and player resources between the two unions, let alone the health of their respective domestic leagues.

But there was only one disparity anyone cared about on the bouncing, boss-eyed streets of Cardiff on Saturday night. 30-3? Not even the heaviest hangover will wipe Welsh memories of this red-shirted romp.