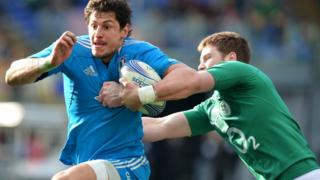 Watch extended highlights from Italy's first ever win over Ireland in the Six Nations in what may be Brian O'Driscoll's last international appearance.

Italy led 9-6 at the break and extended their advantage through Gio Venditti's converted try.